Theatre Review: ‘U Thought I Was Him’ at Arena Players 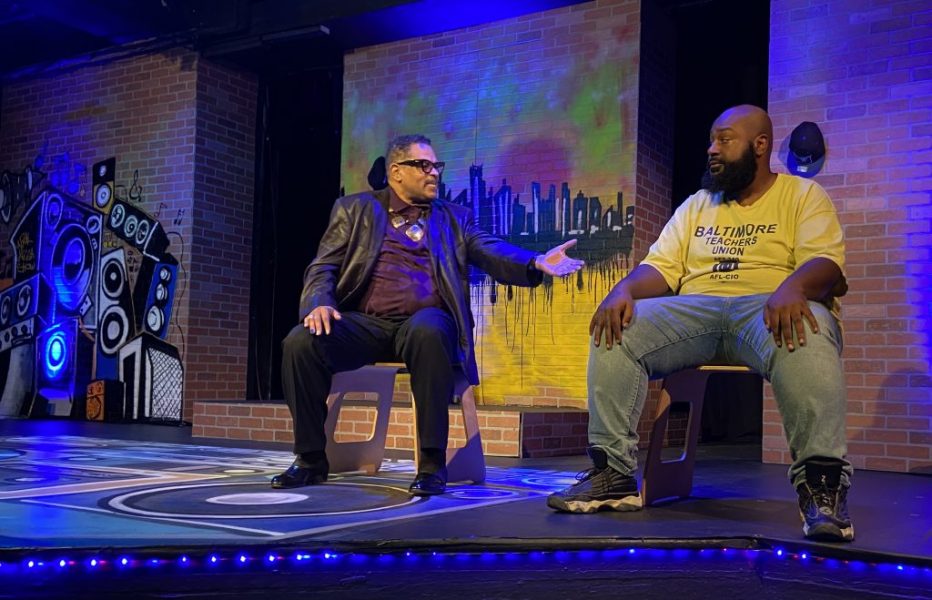 “People try to label you. Put you in a box. Try to make you one way, even if you’re not.”

It began thirteen months ago, with a conversation. Multi-hyphenate artist Nate Couser called director Troy Burton, pitching a stage project that would explore ideas of accountability, framed within the Black communities of West Baltimore. The two men expanded the conversation over time, adding Sheila Gaskins, Derrick Watkins, and Tracie Jiggetts to a “writers’ room.” This group created a podcast series of community talks, gathering personal stories for the creation of “U Thought I Was Him – A Theatrical Mixtape.” This world premiere play borrows its title from a short film that Burton directed for Center Stage in 2014, as part of a series of works inspired by the murder of Trayvon Martin. Its format and themes are similar to Burton’s “A Real “N***a” Show” (our review). In contrast to that equally powerful piece, “Him” shows an exceptionally high level of polish—in both its material and its production.

We haven’t seen a finer, more purposeful production on the Arena Players stage this year.

Five men occupy the small Arena Playhouse thrust. Patrick Bean Jr. plays the character Martique Smith (the name of a brilliant actor whose work with Arena Players and Rapid Lemon Productions is fondly remembered, following his untimely passing in 2020). Martique announces himself as the DJ of this mixtape, then proceeds to introduce the other characters. Kevin Brown Jr (Marshai Allen) is a straight-A high school student. Kevin Sr (Noah Silas), his father, is a second-grade teacher and basketball coach. Cousin (Calvin D. Tucker) is Martique’s best friend, legal scholar, and painter. Uncle Brother (Eddie Satterfield) is the Brown family patriarch. All of these characters have tales to tell, about family, community, and “N” moments of tense encounters with police in which they had “fit the description.”

Structurally, there’s a highly effective blending of monologues with group scenes involving two or more of the characters. Of the latter, one of the highlights is a conversation between Silas and Satterfield in which Kevin Sr expresses worry about his son’s “weirdness” (code for sexuality), and Uncle Brother, who’s out and proud, reassures and scolds him at the same time: “Let the boy be who he’s going to be,” he says, “besides, he’s not gay. Or if he is, he hasn’t told me, and he tells me everything.” The first act features some ensemble movement sequences, choreographed by Tracie Jiggetts, which are tight and professional, covering a range of styles from 1960s Motown to contemporary hip hop. Adding a few of these to the second act would be welcome, but would likely require cutting some of the excellent monologues for time. Truly, the best elements of this play are in its soliloquies—some are in verse, others not, and all hit their targets with brilliant material that’s performed with passion and confidence. Allen delivers a highlight, in which he examines the “gap between us,” closing with a gut-punch: “you shot me because I was wearing a hoodie.” Silas shines in an Act 2 speech: “I’m not asking you to be perfect. I’m asking you to be my mirror.” Bean takes up the metaphor later: “The mirror will never lie to you, unless you lie to it.” Even Satterfield, whose character is responsible for most of the expertly delivered comic relief in the show, displays considerable dramatic chops in a monologue about friends lost to AIDS, which echoes earlier litanies of victims of police killings.

The composition of “U Thought I Was Him” does a great job of avoiding the purely didactic. Yes, there’s a lot of speechifying, but the moral stance of these characters is thoroughly earned by gorgeous writing and powerful acting. There is also a brilliant balance of humor present. One of Bean’s most agile performances is a monologue in which he effortlessly transitions from quoting First Corinthians and Langston Hughes to discussing Fred Flintstone as an archetype of fatherhood. He then passes that baton to Silas, who extolls the ironic virtues of Archie Bunker. All the while, the audience is thoroughly engaged in ways that can only be experienced in the best traditions of Black theater. Yet, all are welcomed.

Accustomed to producing on a shoestring, Arena Players benefits from some really wonderful production elements here. Davon Carey’s set is simple but very well executed. Burton’s lighting and sound are top-notch. Some additions were made to lighting inventory for the show, including very clever use of flashlights from the theater aisles during a police encounter scene. Sound is expertly timed, if just a teensy bit loud during periods when it underscores spoken-word scenes (seats in the center of the house are recommended to minimize this issue). Victoria Jackson’s costumes are plentiful and inspired, telling stories of their own throughout the evening. Stage Management by Meekins and her crew of Couser and Terry T. Johnson-Bey keep the ball rolling without a hitch.

We haven’t seen a finer, more purposeful production on the Arena Players stage this year. One suspects (and hopes) that this show will grow legs and tour in the future, but the chance to catch its maiden voyage this month is not to be missed.

Running Time: Two hours and 17 minutes with one intermission.

“U Thought I Was Him” runs through November 27, 2022 at Arena Players, 801 McCulloh Street, Baltimore, MD 21201. Tickets are available online. Proof of vaccination is not required, and the wearing of masks is optional.