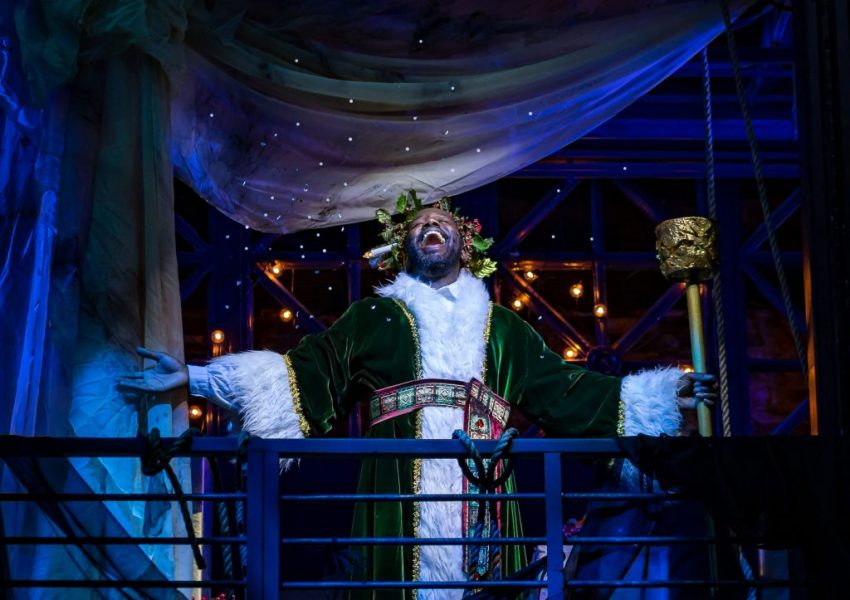 Troy Haines-Hopper as the Ghost of Christmas Present in Chesapeake Shakespeare Company’s “A Christmas Carol.” Photo by Kiirstn Pagan Photography.

There’ll be scary ghost stories
and tales of the glories
of Christmases long, long ago
– Eddie Pola & George Wyle, “It’s the Most Wonderful Time of the Year”

There’s a peculiar artistry involved in telling a story which the audience already knows and reveres. One is tempted to wring out its source material in search of new elements of surprise or to create them from scratch. At the same time, any presentation has to respect certain expectations and to deliver on them. Right or wrong, patrons would surely leave a theater with a twinge of disappointment if they felt denied of some favorite touchstone moment. In their premiere of Laura Rocklyn’s new adaptation of “A Christmas Carol,” Chesapeake Shakespeare Company satisfies all the requirements. The production includes at least two “God bless us, everyone,” and doesn’t skimp on the smaller nuggets either. The boy in the street sent to buy the turkey “as big as me?” He’s there. Scrooge’s “surplus population” line? Oh, you better believe it’s there. Rocklyn’s script plays all the hits. It also manages to introduce a great deal of freshness to the well-loved yarn and keeps it well under two hours. To do this, she took shrewd advantage of our familiarity with Dickens’ story. Her exposition is minimal and, throughout the play, she found just the right bits and pieces to omit. What remains is a well-distilled telling of the ubiquitous holiday tale with room to add some delightfully playful new elements of song and movement.

Burgess is rock solid. It’s hard to imagine a “Carol” on the Chesapeake Shakespeare stage without him.

Director Shanara Gabrielle, making her CSC debut, takes Rocklyn’s fine script and runs with it. Her pacing is quick—never ponderous—but doesn’t feel rushed. Gabrielle deploys her large, gifted company of actors with smooth agility, and dials up a Capra-esque modernity to the play’s takes on proletarian justice. The “present” ghost section features a pair of musical numbers that call to mind Sam Cooke’s “Chain Gang.” The first, an old spiritual called “Rise Up, Shepherd, and Follow,” is gloriously led by Troy Haines-Hopper as the ghost, and features the ensemble in a workhouse setting, banging and clanging their tools in accompaniment. Haines-Hopper’s performance is exquisite throughout. He gives the ghost all the effervescence one expects from the role, but takes an approach we haven’t seen before; in the “my time on this earth is short; it ends tonight” bit, he shows a weariness that betrays the high personal cost of the ghost’s intervention on Scrooge’s behalf.

In the earlier “past” ghost section, Lauren Erica Jackson delights. Where that role is often played with a “Glenda the good witch” vibe, Jackson layers on a bit of snark from time to time. It’s a great touch. Michael Salconi is fabulous as Mr. Fezziwig in the raucous musical number, “Mrs. Fezziwig’s Christmas Cake.” You could kill a man twice after eating a slice! Benny Pope is brilliant, too, as the Schoolmaster here (and in other roles elsewhere). The most nuanced performance, though, is by Shaquan Pearson as Young Scrooge. He was good in the title role in Strand Theater’s “Frankenstein” earlier this season, and in “Carol” he’s charged with the toughest acting burden in the play—depicting a young man in love, full of joy and promise, who loses his way. Morganne Chu, as Scrooge’s fiancée, does most of the heavy lifting between them. When she tells him “May you be happy in the life you’ve chosen,” her heartbreak is palpable. Pearson plays it with a resigned stoicism, almost victim-like. Together, they work.

“Future” ghost, without giving away too much, is not portrayed by a singular actor. There’s an effect created there, which is every bit as spooky as one could possibly want, as are the scavengers who loot the old man’s home (Molly Moores is positively sinister as Mrs. O’Leary). With the hazers cranked up full bore, we’re ready for repentance and redemption. Finally, Scrooge wakes up.

In this telling, NuScrooge bursts out of his house right away, meeting up with the aforementioned Turkey Boy (Alex Jones) on the street. That bit of business done, he visits the home of his niece and her family. Lauren Davis does great work as Frances, bringing strength to a character who might be played as forgiving to a fault. This Frances knows her uncle, and wishes him well without making excuses for him. At the appearance of her reformed uncle, Frances beams, as if she’d known all along that he had this in him somewhere.

The Cratchits are very well represented. Emily Zinski plays it straight-up, with high stakes and high energy. Samuel Richie is the perpetually downtrodden-slash-optimistic Bob. What is it that makes everyone play vicious pranks on this man? When he brings Tiny Tim home from their walk and daughter Martha hides under the table, it practically ruins his whole holiday to be told that she isn’t coming home. Of course, Martha (a very bubbly Jade Jones) can’t bear to sustain the jest for long, but even when she emerges, Richie plays Bob as needing a moment to collect himself. This cruel hoax isn’t the end of it for Bob, naturally. On Boxing Day, the otherwise resurrected Scrooge decides that it’s a good idea to scare his employee to within an inch of his livelihood as the young man arrives 18 minutes late to the office. The statement “you have left me no choice…but to…RAISE YOUR SALARY” seems so, so wicked somehow. Poor Bob.

Ebenezer Scrooge himself is played by Gregory Burgess, in a move by CSC that connects the old with the new. This is Burgess’ ninth straight year in the role, and those who saw the prior adaptation (read our 2019 review) will be interested to see how his performance adapts to this new version. Burgess is rock solid. It’s hard to imagine a “Carol” on the Chesapeake Shakespeare stage without him.

A large design team gives this production very firm footing without being obtrusive. The deep thrust space at CSC isn’t the easiest to light, and Minjoo Kim does gorgeous things with it. Mollie Singer’s set is period-perfect, and Sarah O’Halloran adds original music and a sound design which support the proceedings really nicely. Kristina Lambdin’s costumes are the star here. With help from Grace Santamaria, Hannah Brill, and Wil Crowther, Lambdin masters the Regency period flashback looks as well as the early Victorian bulk of the show. Chester Stacy’s take on the Ghost of Christmas Future is dazzling.

In the spirit of the season and of the story, CSC is in partnership with the Casey Cares Foundation (link). In the words of CSC’s Producing Executive Director Lesley Malin, this organization provides help to the “the real Tiny Tims” of the area. Donations are collected in the lobby.

Running time: One hour and 40 minutes, with one intermission.

“A Christmas Carol” runs through December 23, 2022 at Chesapeake Shakespeare Company, 7 South Calvert Street, Baltimore, MD 21202. For more information and tickets, CSC Box Office is open again for business, Tuesday – Friday from 10 am – 4 pm, by phone: 410-244-8570 or email boxoffice@chesapeakeshakespeare.com. Tickets are also available online. Masks are encouraged but not required. Proof of vaccination is not required.