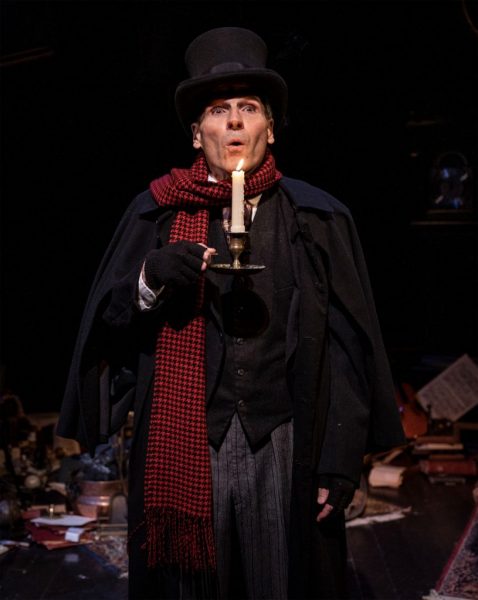 The holiday season is upon us, and while Halloween is long past, it is the perfect time for one of the most famous ghost stories. Why not see what boasts to be the most faithful adaptation of that story, all performed by just one man? That’s right, Paul Morella’s adaptation of “A Christmas Carol” returns to Olney Theatre Center this season for its 13th annual production and it’s one you don’t want to miss.

…phenomenal and entertaining, making a familiar story fresh and sticking true to the central heart of the narrative.

“A Christmas Carol” was first published by Charles Dickens in 1843 to immediate success and praise. Eventually, Dickens would give public readings of the story and he went on to perform an abbreviated version until he died. The novel has been adapted numerous times and to many different forms, such as plays, musicals, operas, ballets, films, and television series. Beloved for its central theme of redemption, the importance of charity and kindness, and the condemnation of greed and selfishness, the story holds a universal appeal, with a message that rings true long past the holiday in which it takes place. To this day, nearly 180 years since its initial release, the story has remained a holiday classic and has not once left print.

This one-man version of “A Christmas Carol” has become a tradition at Olney. Adapted and performed by Paul Morella since the original workshop in 2009 at the Arts Barn Theatre, the show is proudly faithful to the source material, with text that is 99.5% pulled directly from the abbreviated version of the story Charles Dickens performed. It’s not just in the words that the faithfulness lies but in the direction and form as well. The one-man version honors the readings and performances Dickens himself gave for several years. As such, you will be hard-pressed to find a more accurate adaptation of the story and how Dickens intended for it to be told.

Before the show starts, Paul Morella expresses his intent to treat his performance not as if he is the actor and we the audience, but instead, as if he is the guide taking us through this ghost story—a narrator welcoming us into his home to tell a tale around the fire. Guide us he does with a series of brilliant performances transcending the role of storyteller. Not only is the feat of memorizing the over 12,000 words of text impressive by itself, but Morella seamlessly steps in and out of the some 50 characters. He gives each a unique voice and physicality, with distinct mannerisms and expressions that aid in keeping track of who is talking and in which scene, especially when all are played by the same actor in one, simple costume. It’s truly fascinating how he is able to bring the story to life with nothing but the tools provided by his own body and the rich words from Dickens. The show is a stripped-back look at the core of what theatre is: a form of storytelling. It reminds us that one does not need much to escape into a story when, if guided by the right storyteller, our imagination can do incredible things. Paul Morella is that storyteller.

While this show doesn’t require any additional support, that doesn’t mean the tech elements go unappreciated. The lighting and sound subtly contribute overall to defining location, time of day, and space, giving gentle signifiers to the audience while never overshadowing Morella’s performance. There are a few select moments where these designs turn more dramatic and stand out—from the way they worked together to create the ambiance of a thunderstorm to the quick lighting shift when Scrooge beholds Marley’s face in the knocker. All in all, the lighting and sound elements create the many locals of the story in the never-changing set of a messy room. While the set does not alter, the utilization of props with imagination and description transforms the objects in the room. I’m also a fan of the use of real candles that get lit, blown out, and remain flickering in between.

The show is phenomenal and entertaining, making a familiar story fresh and sticking true to the central heart of the narrative. “A Christmas Carol” at Olney Theatre Center is a show you won’t forget and is the perfect way to get into the holiday spirit. Be sure to catch it before it closes, but if you do miss it, I am sure you will have the opportunity see it when the season comes around next year.

Running time: Two hours and 15 minutes including one 15-minute intermission.

“A Christmas Carol” runs though January 1, 2023 at the Mulitz-Gudelsky Theatre Lab, Olney Theatre Center, 2001 Olney Sandy Spring Rd, Olney, MD 20832. For tickets, call the Box Office at 301.924.3400, Wednesday – Saturday: 12-6 pm or go online. Face masks are required at all performances to protect the actors who perform in close proximity to audience members. Face masks are not required in lobby areas.