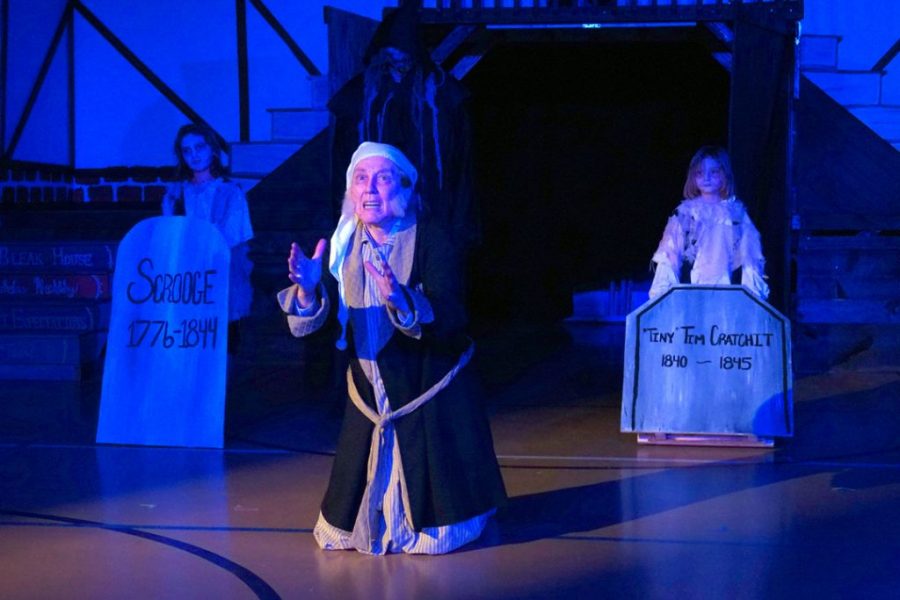 Chances are you are familiar with the plot—ghostly visitors transform a miser’s heart just in time for Christmas. Everyone from Jim Henson’s Muppets to the Royal Shakespeare Company of London has performed Charles Dickens’ “A Christmas Carol.” And why not? The perennial holiday masterpiece is a great story that always draws a crowd and leaves the audience more aware of their connection to all humanity.

…fresh and exciting…this is community theater at its best.

Additionally, every theater company seems to put its own spin on the timeless tale. This is certainly true of the Twin Beach Players’ (TBP) 2022 production. Director Terri McKinstry is intrigued with Dickens as a social reformer and philanthropist who championed the rights of poor children. In retelling “A Christmas Carol,” she imagines him as the director of the play commanding a small army of street kids who stand in for the traditional caroling townspeople so common in other shows. She calls them “Scarolers” because they have a scary, unearthly appearance.

The Scarolers are just one of many surprises that makes the TBP production of the popular classic feel fresh and exciting. A spinning bed that doubles as a time machine and a glow-in-the-dark Ghost of Christmas Past add to the theatrical magic. Rachel Cruz plays the stage-managing Charles Dickens in this production and serves as the set designer. TBP Artist-in-Residence Dawn Denison is responsible for the beautiful, imaginative costumes. Their creativity and ingenuity are on display from the beginning to the very end. This is a production in which the details shine—listen carefully for a haunting rendition of “Carol of the Bells” whenever the Scarolers appear.

As for the acting, the ensemble cast of seasoned performers and debuting newbies are a delight to watch. As Ebenezer Scrooge, J. L. Zemarel delivers a physical performance with guts and gusto drawing the audience into the world of Victorian England’s most notorious skinflint. Harvey Williams shines in dual roles as Bob Crachit, Scrooge’s clerk and as Mr. Fezziwig, Scrooge’s former employer. He is paired with the talented Alexys Adams who plays Mrs. Crachit and Mrs. Fezziwig.

Most of the smaller roles are preformed by TBP youth troupe members. Many of these young people play multiple roles and all deliver a top-notch performance. Jettie Blythe Baden as Want and Alamae James Weaver as Ignorance somehow manage to be both adorable and frightening at the same time.

Despite all the charm this masterpiece holds, it may not be for everyone. Those who are sensitive to loud noises and sudden changes in light may be startled or uncomfortable with some scenes. Some of the costumes and make-up are more reminiscent of Halloween than Christmas. The young children in the audience on opening night seemed enchanted with every aspect of this show.

If you are unfamiliar with TBP, please note ahead of time that this company painstakingly transforms a gymnasium into a temporary theater for every show. While the more experienced performers have no trouble being heard, the acoustics of the location do not always favor some of the younger actors who are still learning their craft. Still, this is community theater at its best.

“A Christmas Carol” runs weekends through December 18, 2022 at North Beach Boys & Girls Club, 9021 Dayton Avenue, North Beach, MD 20714. Tickets can be purchased online. While no formal Covid restrictions are in place, please consider wearing a mask. Parking is free and abundant in the senior center parking lot adjacent to the Boys & Girls Club where TBP performs.