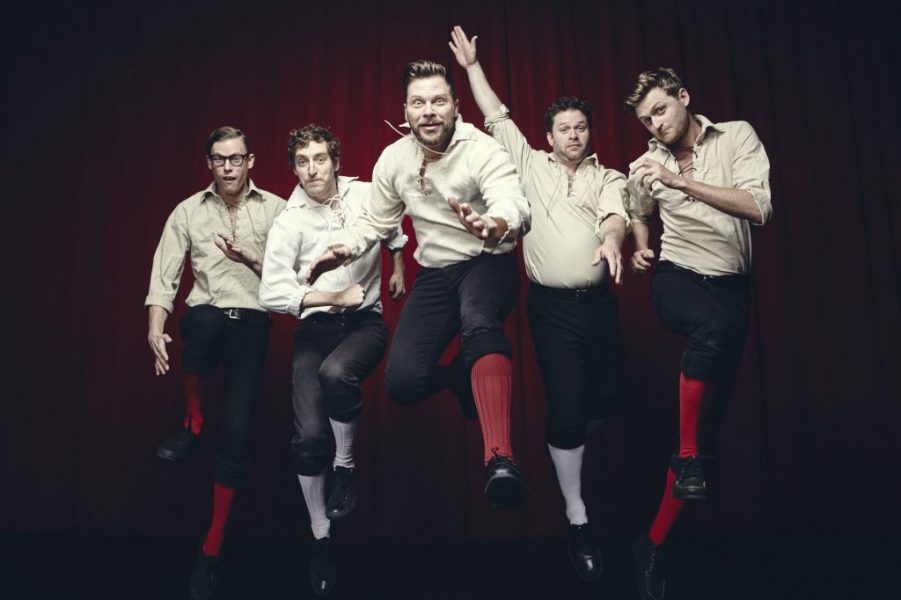 This holiday season, there are so many performances from which to choose. Whether holiday-themed or not, the DMV has a cornucopia of choice during December. This reviewer wants you to know that if you are looking for laughs, you must look no further that The Improvised Shakespeare Company, now playing at the Kennedy Center’s Theater Lab.

Like many improv groups, The Improvised Shakespeare Company thrives on the unknown—taking a suggestion from the crowd and running with it. The proverbial ante is upped with this troupe who takes a suggestion for a play title at the beginning of the show and then creates an entirely original 90-minute Shakespeare-inspired show with it. As you can imagine, that requires not only an enormous amount of improv training and skill, but also a near encyclopedic knowledge of Shakespearean language and tropes, with comedic timing being essential.

I am happy to report that the five performers I saw—Ross Bryant, Blaine Swen, Joey Bland, Greg Hess, and Brendan Dowling—were more than up to this task. They took the selected title, “Heaven’s Cabaret,” and crafted an absolutely hilarious tale featuring mistaken identities; a newly discovered Bible verse; sponge performers;  a room full of OESHA violations; and of course, a kitchen worker name Raymond, whom everyone loves. While their comedic dexterity was impressive enough on its own, the ability to operate in rhyme and sometimes iambic pentameter was truly incredible. While sometimes the laughs were a bit bawdy, they were almost always Shakespearian, which makes it culture and therefore ok.

This is the second time I have laughed just as hard at “Heaven’s Cabaret” as I did at “The Midwife’s Lament.” Each performance is really a work of art with non-stop laughs from start to finish, and I was seriously impressed by the speed and thoughtfulness of each joke. If you have deeper knowledge of Shakespeare’s plays and sonnets, you will get an enhanced experience, but I think anyone with a basic understanding of the Bard’s work will heartily enjoy one of this troupe’s performances.

I highly recommend making time in your busy holiday schedule to visit both the opening and closing night of an original Shakespearian production that will split your sides. If you are thinking “to go or not to go?” it’s not even a question.

Advisory: Due to the improvised nature of the show, some performances may contain mild mature content. Ages 13+ and up.