Theatre Review: ‘The Tempest’ at Round House Theatre, produced in collaboration with Folger Theatre 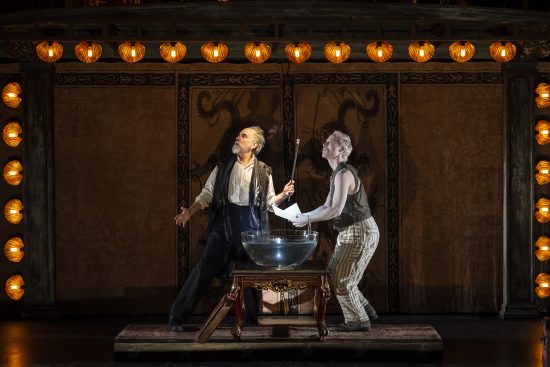 Eric Hissom as Prospero and Nate Dendy as Ariel in “The Tempest” at Round House Theatre. Photo by Scott Suchman.

William Shakespeare’s script for “The Tempest” innately contains much magic and music. In Aaron Posner and Teller’s (of Penn & Teller fame) production at Round House Theatre, these elements rise to new heights in a reimagining that is part-theatre, part-circus, and part-magic show. The classic story of the sorcerer Prospero’s revenge on his traitorous brother, written in the early 17th century, features young love, spirits, monsters, and plotted coups. Updates in the cast and style make this version “The Tempest” an easy entry-point for the Shakespeare-curious and a fresh marvel for longtime fans of the Bard.

Updates in the cast and style make this version…an easy entry-point for the Shakespeare-curious and a fresh marvel for longtime fans of the Bard.

In the “The Tempest,” Prospero (Eric Hissom), his teenage daughter, Miranda (Megan Graves), his spirit servant, Ariel (Nate Dendy), and the enslaved monster, Caliban (Hassiem Muhammad and Ryan Sellers) inhabit a remote island. When a ship passes near, carrying the King (Kenyatta Rogers), Prince (Ro Boddie) of Naples, and Prospero’s brother, Antonio (Cody Nickell), who usurped Prospero’s dukedom of Milan years ago, Prospero seizes his chance for retribution. Summoning a tempest, he sweeps the ship’s passengers to shore, beginning the adventure.

Novel interpretations of some characters update the story without straying from the text. Two originally male characters, Gonzalo (now called Gonzala as played by Naomi Jacobson) and Stephano (Kate Eastwood Norris), are recast as women, improving the overwhelming-male play’s gender-balance and adding further humor to Stephano’s farcical role as a bumbling and alcoholic baker who ventures to overthrow the Prospero and rule the island. The non-human characters—a monster and a spirit—transfix as the most astonishing and sympathetic elements of this adaptation. Caliban—the monster and original inhabitant of the island—brims with physical power as played by Muhammad and Sellers, who move as one to create an inhuman, many-limbed being. Ariel, painted a ghostly white, whisks playing cards to and fro with skilled sleight of hand.

Throughout the evening, stage and close-up magic, illusion, and circus enhance the centuries-old story. Before the house lights even dim, Ariel entertains with card tricks. Then, throughout the show, Prospero and Ariel fall into the familiar rhythms of a magician and his assistant. Words become action as when Ariel recalls how Prospero rescued him from horrific imprisonment while twisted on stage inside a box, in a variation of classic assistant-in-a-box trick. Caliban’s acrobatics are equally entrancing, as the two actors twist and flip.

Daniel Conway’s three-level scenic design conjures both a circus and a ship. The top section, with a wheel and tied off ropes, conjures the doomed ship. The middle section holds the three-person band (Lizzie Hagstedt, Kanysha Williams, and Ian M. Riggs), with assorted percussion instruments, an accordion, and bass on hand. Their songs and instrumentation provides musical interludes and a literal voice and rhythm to the island. The lowest tier, where the heart of all action occurs, features a border of ornamental shell stage lights, partitions of billowing curtains, and a star chart painted on the floor. String lights from Thom Weaver’s lighting design lend a festive, carnival air, along with the mounted carousel seat of a mythic sea creature.

“The Tempest” at Round House Theatre, produced in collaboration with Folger Theatre, is a diverting new adaptation of a Shakespearian classic. Half-story and half-spectacle, onstage magic enriches the sorcery of Prospero and the band of singer-musicians gives voice to the mystic, spirit-possessed island. This accessible comedy offers an ideal opportunity for anyone hoping to dip their toes in or swim deeper into the works of Shakespeare.

Running time: Two hours and 30 minutes with one intermission.

“The Tempest” has been EXTENDED through January 29, 2023 at Round House Theatre, 4545 East-West Highway, Bethesda, MD 20814. For more information and tickets, contact the box office by email at boxoffice@roundhousetheatre.org, 240.644.1100 call, or go online. Masks are required for all guests, regardless of vaccination status, except while eating or drinking in the lobby café area. For more information about Covid protocols, click here.