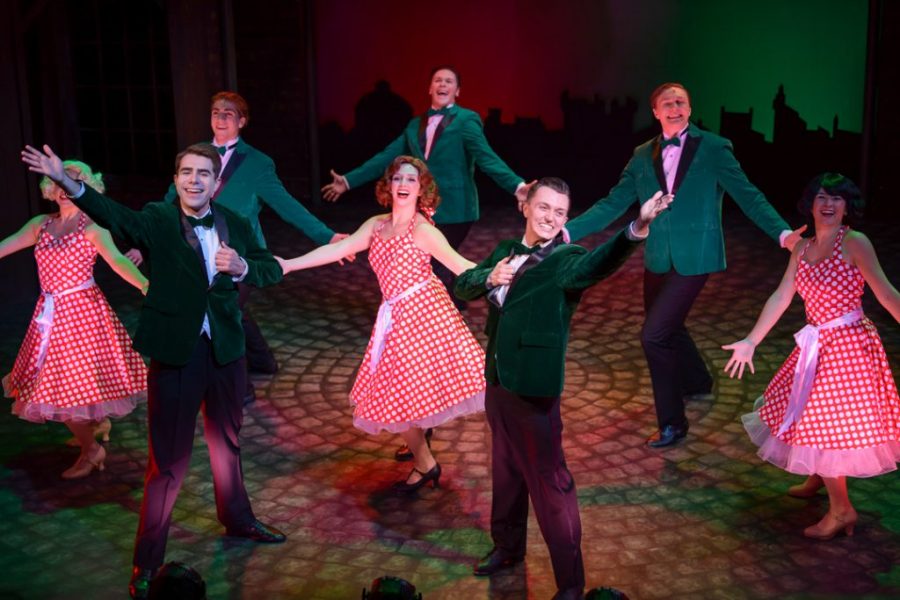 Anyone who loves the 1954 movie “White Christmas” will love this second seasonal offering at Classic Theatre of Maryland. “White Christmas” is the younger, happier sibling of Classic Theatre’s “A Christmas Carol” and shares a stage and fixed sets with that play. Do the Victorian sets fit this second production? Not at all. But never mind—let’s put on a show! Within thirty seconds of opening, the sets, or any sets at all, are irrelevant to this rousing production. The intimate stage, the opposite of the warehouse-like ‘barn’ of the original movie, makes the production seem much bigger as the dancers and cast fill all available space.

Under the tight direction of Sally Boyett and choreography by Molly McCloskey, the play’s fast pace and long song and dance numbers delight and send the audience home smiling.

The principle actors have big shoes to fill and do an admirable job. The audience waits with bated breath as Sal Rocha, playing Bob Wallace (originally played by Bing Crosby), approaches his first solo. No need to worry though, Rocha can belt out a song. The audience relaxes, and away they go!

Rocha makes the part his own. Matched with Kaitlin Harbin as Betty Haynes, both actors are socially awkward and unhappily dealing with the ‘angles’ that their partners are throwing at them left and right. Austin Rubinoski, as Phil Davis, is the king of womanizers and uses his broad smile so much you think he might break. Olivia Clavel-Davis is thankfully less Barbie-like than the original Judy Haynes, and is up to the task of keeping Phil in line as they maneuver Bob and Betty to their final outcome.

As Martha Watson, Christine Asero is a funny and delightful diversion from the original story. Still the housekeeper, Martha is a former broadway star who gets her own numbers in this production while still eavesdropping and messing up everyone else’s schemes. General Waverly, played by John Pruessner, does the army proud as the warm and stately general, and, is there a hint of romance with Martha?

From the opening number to the productions within this production, slowly but surely the audience becomes an important part of the cast. Invited to sing Christmas carols along with the cast and responding to the actors as though at a cabaret, the audience members tip their wine glasses (allowed in the theater from the Cabaret bar) and have a rousing good time.

Adapted from the movie “White Christmas,” this play follows closely to the original, but is less corny, and some of the plot points make more sense. The music of Irving Berlin, with additional songs that weren’t in the original, do not disappoint. Under the tight direction of Sally Boyett and choreography by Molly McCloskey, the play’s fast pace and long song and dance numbers delight and send the audience home smiling.

Either of the two offerings at Classic Theatre, “White Christmas” or “A Christmas Carol,” depending on your mood, are excellent offerings to start your holiday season.