‘A Quick 5’ with Actor Andrew Horn, currently in ‘It’s A Wonderful Life: The Musical’ at Toby’s Dinner Theatre 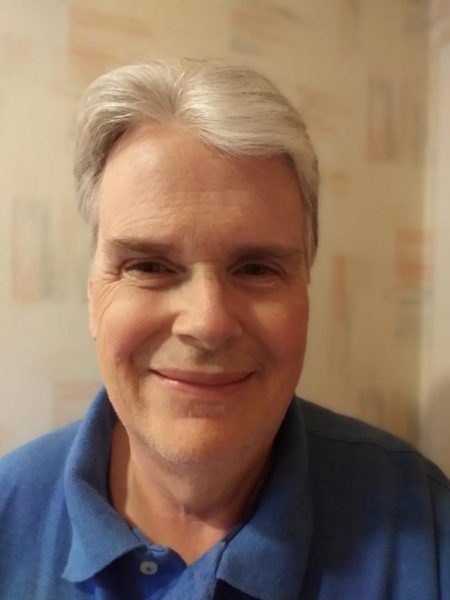 Andrew Andrew Horn has been working in Maryland Theater for over 30 years, primarily in musicals. He loves the challenge of finding the balance between the heightened reality of breaking out in song and dance (well, in his case, song and moving well) and the more earthbound emotions of well-written prose. His first shows were at the late, lamented Harlequin Dinner Theater, and then the late, lamented Petrucci’s. Luckily, he hasn’t managed to kill any other theaters! His first show at Toby’s Dinner Theater was “The Mystery of Edwin Drood” back in 1988. He’s appeared at Toby’s in far too many shows to count. Amongst his favorite roles have been playing Etches in “Titanic,” Jim in “All Shook Up,” and Grandfather in “Ragtime.” He most recently appeared as M. Dindon in “La Cage Aux Folles with ArtCentric in Baltimore. He is currently reprising the role of Uncle Billy in “It’s a Wonderful Life” at Toby’s Dinner Theater. (Read John Bozeman’s review here.)

You’ve played Uncle Billy at Toby’s several times since the first production in 1989. How has the show changed? How have you changed?
We’ve worked on and changed the show every time—cuts, additions, new scenes, new songs—and the loss of some songs. Every time, it’s an attempt to tell the story more clearly and efficiently. In particular, we’ve tried to show more of the relationship between George Bailey and his wife, Mary—how he sometimes closes her off from his feelings, and how Mary reacts to that. I think it really has expanded the show and made it more relatable to the audience.
As for me, as I’ve grown older I think I relate more to Billy—he being a silly, stupid old fool, just like me!  Also, I don’t have to add grey to my hair anymore, for which my hair thanks me. But the biggest difference is all the different actors, directors, and musical directors I’ve gotten to work with—most importantly the men playing George. I’ve found nuances to Billy with each new partnership. I love being able to find something different every time I return to the character.
What is your day like leading up to curtain time for “It’s a Wonderful Life?”
During the pandemic, when the theater was on its hiatus, I started working as a paralegal (which, in my case, is basically a fancy way of saying “a lawyer’s secretary.”) I’m still doing that, with a VERY understanding boss, so I generally work about 9 am-3 pm for him. I want to be at the theater between 7 and 7:15 pm. So the rest of the time,  I think it’s important to take that sort of relaxation time when you can. Around 6 pm, I’ll have something light to eat—a sandwich, salad—I don’t like to eat a lot before a show (after is a different situation!), then leave for work. I talk to the cast and staff, and get into costume. I like to take my time and not be rushed—one reason why I (unlike a lot of the cast) have chosen not to wait tables.
What is your favorite role (or show) to perform?
The easy answer (and it’s true) is Uncle Billy. Having helped create the show and the role some 30+ years ago, I have great affection for the silly, stupid old fool. He’s a good man, but he’s not always competent, so he has to deal with his shortcomings. But he ultimately has enormous heart and humor.
On the opposite end of the spectrum, Marley in“A Christmas Carol” is just plain fun. He’s only in one scene, but it’s just hammy and boisterous, with a great song. Among shows I’ve only done once, Jim in ”All Shook Up” has been a great favorite—not only because he’s one of the few characters I’ve played who has a love interest, but because he is so genuine. I honestly didn’t have to try hard to find the humor. I just put myself in the situation (a middle-aged man who thinks the way to woo a woman is to become an Elvis-like character) and let how ridiculous it was to take me away. A few more are Andrew Carnes in “Oklahoma,” Abner Dillon in “42nd Street,” and The King in “Cinderella.”
What’s the theatrical future for Andrew Horn?
I have no idea. It’s one of the realities of the actor’s life—you just can’t predict the future, until you’ve booked your next gig. All you can do is try and hope for the best. It’s funny because a few years ago, that would have been pretty much my full answer. I’ve learned relatively recently that I can find joy in things other than acting in a way I hadn’t realized. I enjoy working as a paralegal, which I would never have imagined. In fact, if you had asked me this question a few months ago, I might have said acting/theater was not that important to me. But returning to this show, to Toby’s, and this great group of people has re-ignited that passion. So, with luck, I’ll be returning to doing this more often—not necessarily full-time, but as often as I can get cast. We’ll just have to wait and see.
Are there any roles that you would like to play in the future?
Oh, so many! In musical theater, I have great affection for a lot of the British character actor roles— Pickering, Pellinore, or any of the great Gilbert & Sullivan patter parts. I played Major-General Stanley when I was far too young. I’m a bit old for a few of my dream roles now—Amiable in “The Baker’s Wife,” Henry Higgins, even Tony in “The Most Happy Fella,” but it’s nice that I’m the right age for Capt. Andy, or even Herr Schultz in “Cabaret”…pretty much any funny old guy with a hint of tragedy in his past (or future).
“It’s a Wonderful Life: The Musical” runs through January 15, 2023, at Toby’s Dinner Theatre, 5900 Symphony Woods Road in Columbia, MD 21044. Tickets can be purchased by calling the box office at 410-730-8311 or by going online.