‘A Quick 5’ with Choreographer and Dancer Gabriel Mata 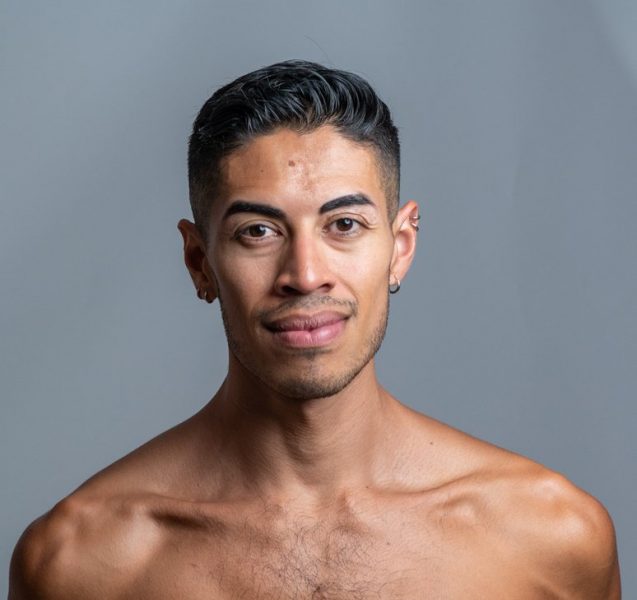 This Friday and Saturday, Dance Loft on 14 presents a deeper look into past, present, and future dance works of D.C.-based artist, Gabriel Mata.

Gabriel Mata (pronounced: gah-bryehl mah-tah) is a Mexican-American dance choreographer, educator, filmmaker, and performer. He navigates the world as queer, Latinx, immigrant, and recently became a permanent resident of the United States. He received his MFA in dance from the University of Maryland, College Park. Mata’s seven-year research of “motion memoirs” is an extension of “talking dancing.” Through motion memoirs, Mata accesses the moving body, taps into memory, and uses voice to work through intersectionality.

Can you tell us a little about yourself? How did you find dance, and what made you say ‘this is for me’?
I don’t come from a background in dance. Growing up undocumented as an immigrant in Southern California, it was something that seemed like it was in our periphery. It wasn’t in our world. When I was in high school, a friend of mine told me that I didn’t know how to dance. I was very fortunate that my high school, Santa Anna High School, had a really good dance program. I started and was so engaged, not just because of the movement, but because the instructor was well-versed in many forms—the nutrition aspect, the history aspect, the choreography and the production components. She was very inspirational to me.

When I went into college, I got a scholarship and was very engaged and connected to dance. It was in college when I discovered this is what I want to continue to pursue and challenge myself. I moved to the Bay area in San Jose, CA where I got my undergraduate degree and started training in Limón technique, as well as contemporary ballet practices.

The third part that comes to play as to how I formulate the work is I started working with an artist based in Los Angeles named Joel Smith. He specifically focuses on “talking dancing.” Talking dances are where you use voice, and he uses experimental choreography and improvisational structures to create work.

Those are the three kinds of components that have allowed me to have a vocabulary and movement patterns in which to weave in and out. The most important thing for me is that I learned to use my voice and value it as equally as the body—especially from someone who comes from an undocumented background. It’s the limitation—not having a vote and representation—that I thought an engaged voice had the power to make that narrative present vocally. So I create performances now that I call “motion memoirs” because they fall back and reflect on the past and somehow try to pave a path forward, but are still engaged in the present today—being engaged with how we navigate not just nationally, but even as just an individual.

Is everything you’re performing this week at Dance Loft on 14 going to be part of your “motion memoirs” project?
Yes! All four pieces. Two are more focused work on Mexican magic realism which is me recognizing that the work I do actually ties into those ideas and dives deeper into how I can create those themes of magic realism.

One of the other pieces is one I created in 2017 and it’s the most performed piece I have, so it’s in the bones. It feels so natural to me, it’s almost like breathing, and yet, I can have space in which to play around with it. There are two works in progress and two pieces I have already premiered. The second work in progress is a duet. It’s almost an extension of my graduate research at University of Maryland, but my thesis presentation was canceled because of COVID. There’s still so much about that piece in which I can dig deeper and I wanted to go further with it. Just because I graduated doesn’t mean I can’t continue to observe and work with those themes.

Can you talk about your creative process, especially with the pieces you have already premiered? Do you find that they change as you go, or do they stay the same, and how does that longer time scale approach to the creative process impact your work?
I’m performing one of the solos and the other solo is being performed by a local dancer. The one that I perform is interesting because I guess it’s not bound by counts or musicality, although there is a set sequence and movement pattern. Sometimes I decide to take a little more stretch here, or go faster there, and try and get myself to that point of exhaustion. So it’s almost goal-oriented with a sequence. The sequence is a lot more flexible than it is rigid and set to counts. That just becomes a personal challenge—to get myself out of my comfort zone, even though sometimes it feels that piece in itself I know very well.

The second piece was actually set to a performer in San Jose. She presented it last year, and unfortunately, I couldn’t bring her over to perform the work. I am working with a dancer whose background is ballet folklórico and works with Corazón Folklórico, the DC Mexican folklórico company in D.C. Her movement vocabulary and her experiences are so different from the first person who premiered the work. I still follow the idea of dance as humanistic, so I try not to have a dance be replicated by another person. Instead, I try to hone in on their individual strengths and we can develop artistic agency because once they’re performing, it’s on them to experience that world. Not the world that I allow, but I feel that the best way to approach it is to offer them the most engaged and experienced practices for them to understand it through their body first, rather than through my eyes or my choreography. It’s about them, their body, and their sequencing. I feel prioritizing that is the best way for them to hone in on themselves but also in on the piece. I did have to change some sequences and remove some things that were in the first iteration. This feels like a second iteration of the piece so the choreography is not the same. How they navigate through the space as a spatial pattern is similar, but in movement, it’s delivered differently. I don’t think I have a favorite. Even though we finished our last rehearsal yesterday, I can’t say that I like the first iteration over the second iteration. They both compliment each other and they are both within the same world.

Would you say that choreography for you is almost more about world-building than about sequencing steps?
I have not thought about it that way, but maybe a humanistic aspect of dance doesn’t call for replication or exactitude, but the presence of being alive.

You have several different collaborators on this project. What was it like to work with your collaborators and what challenges or discoveries did you make in the collaborative process?
It’s a learning process for me. Greg David is a choreographer and they identify as they/them and so I want that identity. I don’t build characters or form different stories. I think I place our experiences front and forward. For me in that collaboration, it was about understanding how it is that Greg can embody themselves so they have a lot of agency and choices to make and they share them with me. It’s building that trust and clarity and also it’s me leaving space to understand and learn. The position and range as the choreographer is for me a little broader because I try to be there as, yes, a collaborator, but also, yes, as a friend, as an ally, and in any way that I can support the work. So my ideas about the piece itself is to offer them space, but also allow them to bring their information and their contributions.

Can I talk about the lighting designer? I had absolutely no prior relationship with the lighting designer, Rowan, who I just met. I like to have very minimalistic and simple cues, sometimes just for efficiency and also we don’t have the biggest budget to produce this work. Rowan came in early and was already working while we were in the space rehearsing. While I tried to be efficient, I wanted to save Rowan’s time as well. Rowan really went out of their way to make the pieces so much more dynamic than the way I saw them. I can create simple plots and cues for performances because that’s kind of how we had to navigate. Rowan really went in and we gelled right away. I let them know, “I see what you’re doing, keep doing it, and I trust you.” It was a wonderful surprise to have someone who was intuitive, but also open and super easy to talk to. I love how the pieces themselves have already grown more than how I imagined them in my mind or how I’ve been seeing them in the rehearsal process.

Justin Rustle is a performer, educator, and writer from Gaithersburg Maryland. He received his foundational training at Maryland Youth Ballet and has a BFA in Dance Performance from Butler University and an MA in Performance Studies from the Tisch School of the Arts at NYU. Justin has performed across the United States with companies including Ballet Arkansas and Bowen-McCauley Dance, as well as appearing as guest artist with numerous other companies and schools. He is currently a dancer with Dana Tai Soon Burgess Dance Company based in Washington DC.