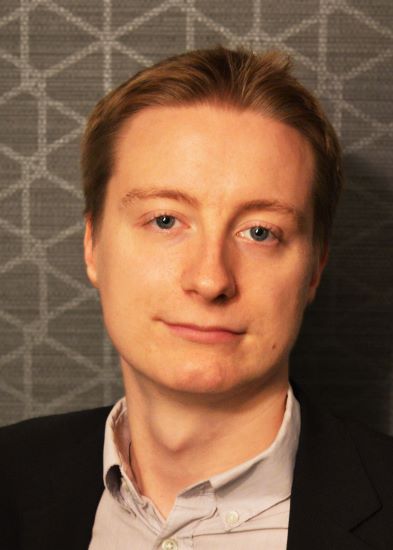 Now playing at Theater J is the “profound and absurd” philosophical comedy, “Two Jews Walk Into a War…A Vaudeville.”

The updated play by Seth Rozin follows Ishaq and Zeblyan, the last two Jews in Afghanistan and takes place in the last synagogue in Kabul. The only problem is these two cannot tolerate each other. The play, directed by Theater J’s former Artistic Director Adam Immerwahr, is a little bit “The Odd Couple” and a little bit “Waiting for Godot.”  You may find it profound but will most definitely find it wickedly funny.

Can you tell our readers a bit about yourself?
I’m a scenic and projections designer based in Washington D.C. working locally, and regionally in the U.S. I grew up in Germany, near Frankfurt am Main, and moved to New York City for high school. After graduating from the University of North Carolina School of the Arts, a fellowship at the Kennedy Center brought me to Washington, and it has been my home ever since.

Since “Two Jews Walk into a War…A Vaudeville” seems to be a bit Theatre of the Absurd and a little Broadway comedy, how will you set also reflect those genres?
Comedy is grounded in realism and naturalism; the set design acts as the main vehicle for that. In the design, we establish a context, which allows the characters to break out of and oppose that context, subverting our realistic expectations. The set itself isn’t particularly theatrical, which allows the theatricality of the acting to stand out. 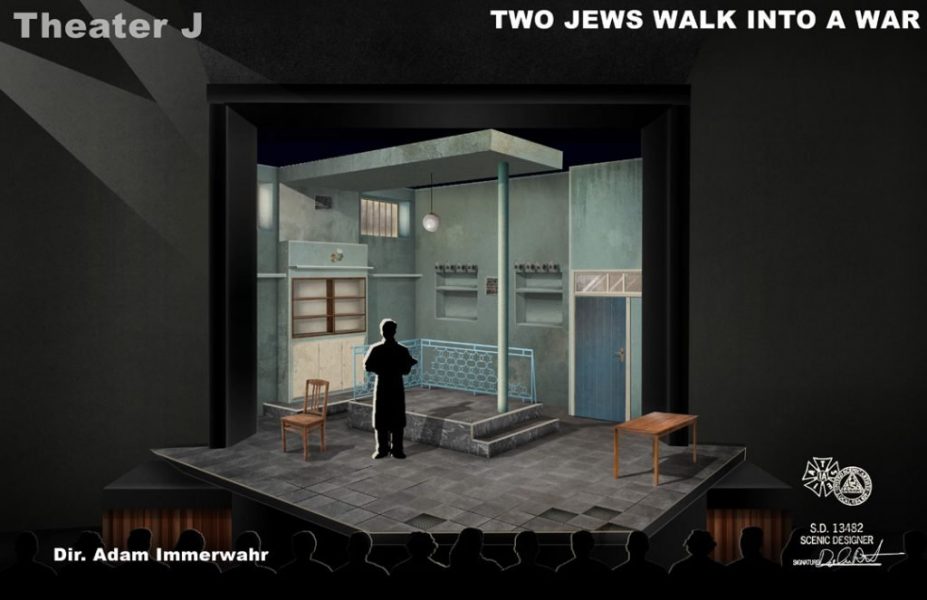 Rendering of the set for “Two Jews Walk Into a War,” courtesy of the designer.

The play takes place in Afghanistan. How will your set reflect the art, architecture, and culture of that region?
We’re benefitting from a story that is inspired by real people, in real places. Through research, we initially duplicated their space, then edited and manipulated the structure to serve our production needs. We avoid using western architectural standards, such as light switches, door knobs, and American “Edison” outlets, among others. There are key pieces we have built from scratch to capture defining characteristics from the location in Kabul.

Do you use flats, drops, projections, balconies etc. to create the synagogue in this set?
The set is constructed mainly of Hollywood Style flats. However, the one element that isn’t common in this venue is a ceiling piece, which is suspended over the set. It allows us to crop the height of the space, in order to humble it, and helps offset the scenery from the proscenium.

On a personal level, what is the set, other than this one, that was your favorite to create?
I designed a production of “Nixon in China” in 2019, where the set was designed for, and around, the chorus from that opera, making them an integral and principal storyteller. This solved story-telling challenges at the core of the piece, without attempting to hide or obfuscate them. This is my favorite example of my work because it elevates the story, rather than the set—something I try to do with every project. To me, the set functions to serve the stories of the people on it.

Theater J’s production of “Two Jews Walk Into a War…A Vaudeville” will be playing through February 5, 2023 at the Edlavitch DCJCC’s Aaron and Cecile Goldman Theater, 1529 16th Street, NW, Washington DC 20036. For more information, go to Theater J’s website.  For tickets, go to this link.