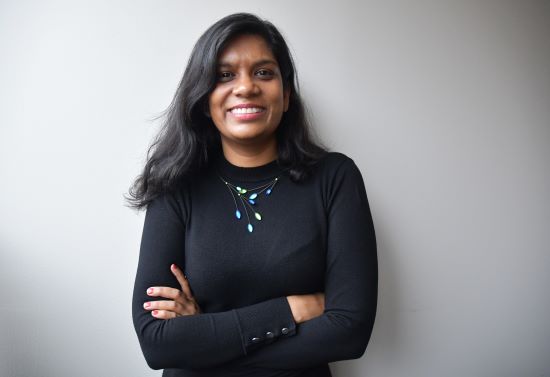 “Pride@Prejudice” written by Daniel Elihu, is an updated look at Jane Austen’s beloved novel. The play opens January 27, 2023 and is being presented by Rockville Little Theatre which is celebrating its 75th anniversary. Laura W. Andruski, the president of RLT, is directing and it is produced by Tereas Gilcrist. With this romance during the Regency England, the play looks at “the nuances of modern love.” The story is the one we all know—Elizabeth Bennet and Mr. Darcy sparring as the young lovers only this romantic pair blogs, Googles, and tweets.

Niranjali Amerasinghe (Actress A/Elizabeth Bennet) is delighted to be playing Actress A/Elizabeth Bennet. She has dreamed of playing Lizzie since she was ten years old, so this is quite literally a dream come true. What better way to deconstruct this incredible story than with some added sass and commentary. Niranjali has performed with Rockville Little Theatre, Rockville Musical Theatre, and The British Players since joining the local DMV theatre world in 2021, and this is one more amazing stop in the journey.

Can you tell us a bit about yourself?
I was born and raised in Kandy, Sri Lanka. After high school, I went to the UK for university, hopped across the pond to do my masters, and have now lived in the DMV for the last 16 years. I’m an international environmental lawyer and have spent most of my career working on climate change and human rights. Today, I lead the U.S. office of an international humanitarian and development organization called ActionAid.

Music was my first love and I trained as a classical pianist and vocalist for many years. I discovered theatre along the way, getting involved in productions at school and later in university. For many years, I was focused on my career and family, but as we started emerging from the pandemic in 2021, I realized I needed music and theatre in my life again. I got a small role in RLT’s production of “Rumors,” and the rest is history!

Can you tell us about your character, Elizabeth Bennet?
I fell in love with Lizzie’s character when I first watched the 1995 BBC adaptation of “Pride and Prejudice” at age 10. The story takes place in the Regency era. Elizabeth’s family is part of the upper-class though they are not particularly rich. She is a keen observer of society’s follies, is fiercely independent, and doesn’t suffer fools. Her beauty lies in her liveliness, intelligence, and wit. That said, Lizzie is not without her flaws. Prejudice clouds her judgment, and she finds herself humbled on more than one occasion. As she wrestles with uncomfortable truths and opens herself to change, she also discovers her great love, giving us a timeless and much-adored love story.

How do you think this play reflects the original novel by Jane Austen? How is it different?
The play does a masterful job of bringing out the core elements of the original novel. The deconstructive style, however, allows the play to drive home social commentary and relational dynamics more directly and explicitly than the novel itself. As a result, we get a mix of wonderful moments from the original story and post-modern analysis that gives the play a sharp and refreshing feel. It has something for everyone, no matter how well they know the story.

Do you prefer performing in plays or musicals and why?
You’re seriously making me choose?!

Is there another role you would like to do in the future?
Lizzie Bennet is my dream role, so I can’t say enough how grateful I am to be playing her.

If I had to pick another, it would be Anna of Cleaves in “Six,” a musical about the six wives of Henry VIII. I love her confidence and sass in the face of being rejected by the king for not being as beautiful as her portrait. The production is a glorious celebration of feminism and rewriting one’s story. I find that really empowering.

“Pride@Prejudice” runs Friday – Sunday, January 27 through February 5, 2023 presented by Rockville Little Theatre at the F. Scott Fitzgerald Theater on the grounds of the Rockville Civic Center, 603 Edmonston Drive, Rockville, MD 20851. For tickets and information, go to this link. The play is recommended for ages 12+. Face coverings are optional.