Concert Review: ‘Revolution: The Music of the Beatles. A Symphonic Experience’ presented by the Baltimore Symphony Orchestra 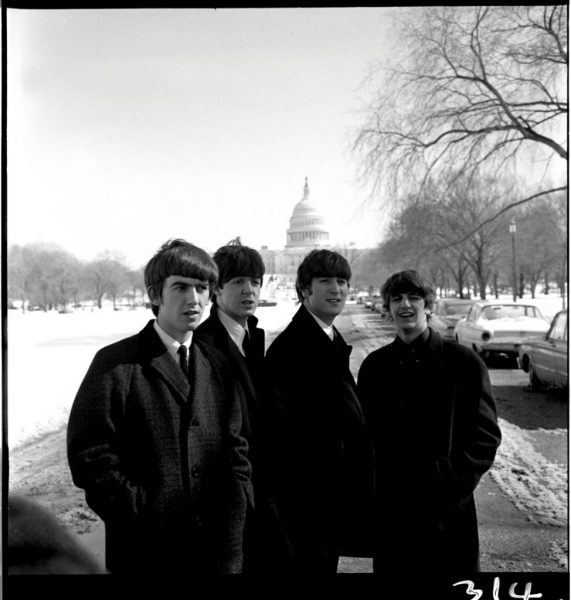 “Revolution” takes audiences on a magical musical and visual journey of The Beatles. Photo Credit: Photo under license from The Beatles Book Photo Library.

An interviewer once asked John Lennon how the Beatles named their songs. John said he was getting a haircut at a salon when he heard one of the stylists ask a customer how she liked her hair as she was leaving. The woman replied, “Oh, I love me do.” “Love Me Do” was the first single released from the British rock group, also known as the “Fab Four” (Paul McCartney, John Lennon, George Harrison, and Ringo Starr). Formed in Liverpool, England in 1960, they spent the next decade becoming the most influential band in the history of the recording industry.

The Meyerhoff audience was on its feet dancing…

Their catalog of 213 songs consists of 188 originals and 25 covers. They received seven Grammy Awards, 15 Ivor Novello Awards (for songwriting and composition) and an Academy Award for Best Original Song Score for the documentary film “Let It Be”(1970). They starred in four musical comedy films: “A Hard Day’s Night” (1964), “Help” (1965), “Magical Mystery Tour” (1967) and the fantasy “Yellow Submarine” (1968) in addition to documentaries, filmed appearances, and concert tours. After their break-up in 1970, each member went on to become a solo artist.

The subtitle of this program, “A Symphonic Experience,” led me to believe the evening would feature the Baltimore Symphony Orchestra playing arrangements of the Beatles’ songbook. A quick look at the sound and lighting equipment stage right and in the rear of the orchestra also revealed a rock band set upstage of the orchestra and mics for three singers downstage. The concert was preceded by a slideshow of black and white photos taken from the Beatles Book Photo Library reflecting their personal and professional lives, including the famed Abbey Road recording sessions. The slideshow was repeated during intermission.

The program described the show as “the first fully licensed multimedia symphonic exploration of the Beatles,” however a better description would be a Beatles Tribute Band with symphonic accompaniment and a visual canvas for each song. Jack Everly, the BSO principal pops conductor, led the orchestra but did not do his usual narration except for a brief remark about his connection to “Eleanor Rigby.” The song introductions were handled by the three singers (Colin Smith, Paul Loren, and Rick Brantley). The rock band members were Oscar Rodriguez (lead guitar), Brian Killeen (bass guitar), Jordan Rose (drums), and Luke McGinnis (keyboard). Both the BSO and the rock band accompanied the singers in 28 songs from the middle and late 1960s Beatles’ catalogue. Songs from the early period, such as “I Want to Hold Your Hand” and “All My Loving” were not performed. There were solo and group numbers, and the singers encouraged the audience to clap and sometimes sing along with them. The singers were dressed casually and had voices well-suited to the material. The BSO members wore the traditional black and white of the pops concert attire.

Considering the fact that most attendees who experienced the Beatles’ era are now seniors, it was quite an experience to see them waving cell phone lights back and forth during the final choruses of “Hey Jude!” There was a constant light show on the ceiling of the Meyerhoff during the production, and the backstage curtains were lit alternately in blue and pink. There was even a smoke machine used for one of the songs.

The real “stars” of this production, however, were the photos of Leslie Bryce, the in-house photographer for the “Beatles Book Monthly” (the official fan periodical of the Beatles), and the series of original animations by filmmaker Adam Grannick and video designer Charles Yurick. Each song had its own visual effects, some even with the lyrics added to enhance the experience.

With 188 original songs to choose from, you would not think the concert would end with a rousing cover song, recorded but not written by the Beatles, especially since the song was a major hit for the Isley Brothers in 1961. The Meyerhoff audience was on its feet dancing and, yes, screaming out the words of “Twist and Shout!” Now that’s Beatlemania!

Herb Merrick has been involved in Baltimore’s theater scene as an actor, singer, piano accompanist, and musical theater instructor for many years. He has directed musical theater and revues for CCBC, several community theaters, Baltimore private schools, and senior retirement communities and centers. Herb has entertained with sing-along piano in Baltimore nightclubs and restaurants. He holds B.A. and M.A. degrees from Northwestern and Ohio State and advanced study certificates from Princeton and Johns Hopkins Unversity.