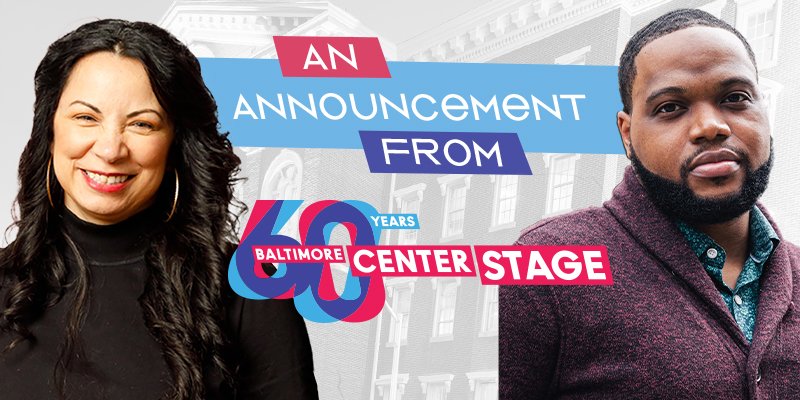 Baltimore, MD: Baltimore Center Stage (BCS) announced today that Artistic Director Stephanie Ybarra will depart from the organization after five years of leadership on April 1, 2023 to become Program Officer in Arts and Culture at the Mellon Foundation, the nation’s largest supporter of the arts and humanities. A national search will commence to find the organization’s next civic-minded artistic leader. During the search, acclaimed director and producer Ken-Matt Martin, who is directing BCS’ upcoming production of Tiny Beautiful Things, will serve as Interim Artistic Director.

“I’ve spent most of the last thirty years making theater in some shape or form, so this is not a leap I make lightly. I’m humbled and honored to have the chance to serve the national arts and culture sector during this time of enormous challenge and opportunity,” said Ybarra. “My great comfort as I move forward is that BCS has a staff and board team, community partnerships and an artistic network that are aligned and collectively reaching toward a bright future of their own imagining. I’m proud to have worked alongside them, and prouder still to introduce my dear friend Ken-Matt to this organization and city, which have become so special to me.”

“Stephanie has been a transformative leader of BCS during her tenure,” noted Sandy Liotta, President of Baltimore Center Stage (BCS) Board of Trustees. “Over the last five years, Stephanie and her team kept BCS open for storytelling through the hardest moments of the pandemic and amplified the theater’s relevance and service to our communities by welcoming new voices into new civic conversations. We fully support Stephanie and know she will exceed expectations and make another major impact in her new role at the Mellon Foundation. The BCS family is also lucky to have the incredible Ken-Matt Martin join us in an interim capacity to provide artistic leadership during this transitional period.”

“It’s an honor to join the BCS team during this time of transition,” noted Martin. “I’ve come to know and love Stephanie’s work as a leader of change. Although I will miss having her at BCS, I am inspired to continue the work that she has done, and I’m looking forward to calling Baltimore a new artistic home for me while the team searches for the next BCS leader.”

Under her leadership, Ybarra expanded the scope of programming at BCS to create new ways for the theater to contribute to social dialogue locally and nationally, including launching the Baltimore Butterfly Sessions, a civic dialogue series, leading Play at Home, a national pandemic-era grassroots commissioning project that is now housed at the Library of Congress, and hosting President Biden for a nationally-televised Town Hall in Baltimore. Under Ybarra’s ethically-driven decision making, BCS has become known for its strong commitment to anti-racism in the workplace, which was highlighted nationally in stories by NPR and The New York Times. BCS also maintained sustainable practices during the COVID-19 pandemic to ensure the organization would be able to serve future generations of theatergoers.

She leaves the company in a strong and stable financial position. During her tenure, the company’s liabilities dropped by more than 89%. She shepherded over $34 million in revenue, increasing the net assets of the company by more than $1 million. Additionally, the implementation of robust civic programming and artistic partnerships led to the expansion and diversification of the BCS audience, including 48% of audience members coming to the theater for the very first time in the last year alone.

Other major artistic accomplishments under Ybarra’s tenure include the production of 10 world premiere works, including The Swindlers; The Folks at Home; Dream Hou$e; Glorious World; Extinction; The Garden; Thoughts of a Colored Man; Richard & Jane & Dick & Sally; Where We Stand; and How to Catch Creation. Additionally, BCS saw an expansion of the theater’s commissioning program, including 14 new commissions and a range of new commissioning tools designed to offer flexibility to better meet artists where they are in their creative process.

As Interim Artistic Director, Martin brings extensive experience as both a director, producer, and artistic administrator. He has worked at theaters across the country including Rites and Reason Theatre, Pyramid Theatre Company, Brown/Trinity Rep, Williamstown Theatre Festival, Goodman Theatre, The Playwrights Center, Space at Ryder Farm and others. Ken-Matt co-founded Pyramid Theatre Company in Des Moines, IA where he served as Executive Director until 2018. Pyramid is the first and only theatre in the state of Iowa to produce plays by August Wilson including Martin’s productions of Fences and The Piano Lesson. Martin’s producing and directing credits in Des Moines have received thirty-four Cloris Leachman Excellence in Theatre Award nominations, including two awards for Best Play and a Special Honor for Martin in 2016. Martin previously served as Producing Director at Williamstown Theatre Festival where he negotiated the Broadway transfers of The Sound Inside and Grand Horizons. Martin has also served as Associate Producer at the Goodman Theatre where he co-created the Future Labs program. He is also the former Artistic Director of Victory Gardens Theatre. He received two degrees from Drake University and his MFA in Directing from Brown/Trinity Rep.

FOR MORE INFORMATION ABOUT BCS: www.centerstage.org

Founded in 1963 and designated the State Theater of Maryland in 1978, Baltimore Center Stage provides the highest quality theater and programming for all members of our communities, including youth and families, under the leadership of Artistic Director Stephanie Ybarra and Managing Director Adam Frank. Baltimore Center Stage ignites conversations and imagination by producing an eclectic season of professional productions across two mainstages and an intimate 99-seat theater, through engaging community programs, and with inspiring education programs. Everything we do at Center Stage is led by our core values—chief among them being Access For All. The Baltimore Center Stage mission is heavily rooted in providing active and open accessibility for everyone, regardless of any and all barriers, to our Mainstage performances, education initiatives, and community programming.