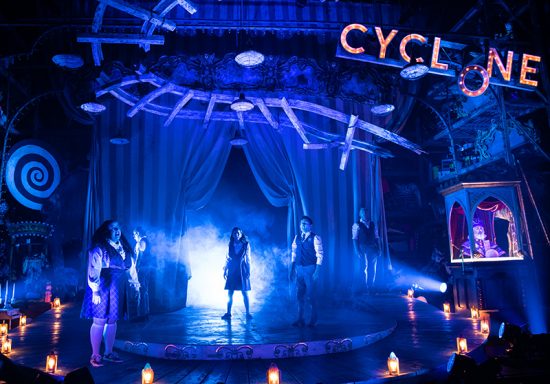 St. Cassian High School Chamber Choir were dealt an unlucky hand—they came in second place when they were the only team in competition; they hail from the boring small town of Uranium, Saskatchewan; and their lives fall far short of what they hoped. And now, they’re all dead. A rollercoaster derailment sends these teenager to a murky purgatory where an all-knowing fortune-teller machine, the Amazing Karnak, offers them a chance to send one, but just one, back to life. Wacky and wonderful, “Ride The Cyclone” transforms a darkly absurd premise into a side-splitting, hilarious original musical. Developed over the past 15 years and coproduced by McCarter Theatre, this unmissable Arena Stage production is packed with earworm songs and vivid cast of characters.

Before joining The Amazing Karnak’s (Marc Geller) death-or-life game, the six teens had little in common beyond the choir. Ocean O’Connell Rosenberg (Shinah Hey), student class president and a type-A try-hard, dreamed of escaping her hometown and hippy-dippy parents for college. In contrast, Noel Gruber (Nick Martinez) dreamed of, well, becoming a “hooker with a heart of black charcoal” out of a French noir film. Ricky Potts (Matthew Boyd Snyder), mute from trauma in life and delegated to tambourine within the choir, finds his voice in death. Constance Blackwood (Gabrielle Dominique), the “nicest girl in homeroom,” struggles to stand up for herself. Mischa Bachinski (Eli Mayer), a Ukrainian aspiring rapper, longs for his long-distance girlfriend who left “mostly positive feedback” on his YouTube channel. Then there’s the “Mystery Candidate,” Jane Doe (Ashlyn Maddox), who lost her head in the accident, identifiable only by her St. Cassian’s uniform. With no name, memories, or past, Jane Doe channels evil-doll-in-a-horror-movie energy with her jerky gait and wide mismatched eyes.

Each song in the pastiche score by Jacob Richmond and Brooke Maxwell seems to top the last as it moves through bubble-pop, rap, ballad, and electronic music. The creative design commits to the bit as each character gets their moment in the spotlight to belt their truth, whether Ocean’s social Darwinist “What the World Needs” or the melancholy haunting of “The Ballad of Jane Doe.” High-energy choreography by Jim Lichtscheidl, with additions by Tiger Brown, ranges from Ukrainian folk dance for Mischa’s “Talia” to a seductive chair dance and tango for “Noel’s Lament.” Trevor Bowen’s costumes start simple with the plaid gray choir uniforms, but have plenty of fun in store including psychedelic tails and ears for extraterrestrial cat-people and tear-away dress pants.

Politically, the script glances over a couple charged topics. Predating the Russian invasion of Ukraine, Mischa’s storyline might seem insensitive written today, heralding alcoholism as his national heritage and declaring Ukrainian men have only two emotions: anger and passion. Separately, Ricky Potts’ portrayal of disability has been a source of some controversy, alluded to in an Arena Stage blog. In past iterations of “Ride the Cyclone,” Ricky Potts had a degenerative disease and used mobility aids, which drew conversation and critique about theatre’s portrayal of disability when the afterlife “cured” these physical limitations. Arena Stage’s production sidesteps this debate, casting an able-bodied actor to play a Ricky Potts with trauma-induced mutism.

“Ride the Cyclone” is something of a cult musical, as Arena Stage’s artistic director Molly Smith asserts in the printed program. While its black comedy and strangeness may ruffle staunchly traditionalist theatergoers, it’s gathered a devoted fan base among the younger generation of theatre fans—and for good reason. Flamboyant creative design and a well-matched cast maximize the heart and humor in this ninety-five minute show. Strap in for a wild time at “Ride the Cyclone”—unlike that unlucky rollercoaster, this whirlwind ride delivers laughter and delight.

Running time: One hour and 35 minutes without an intermission.