Theatre Review: See ‘Between Riverside and Crazy’ for a most memorable visit to NYC and 2nd Stage’s Hayes Theatre 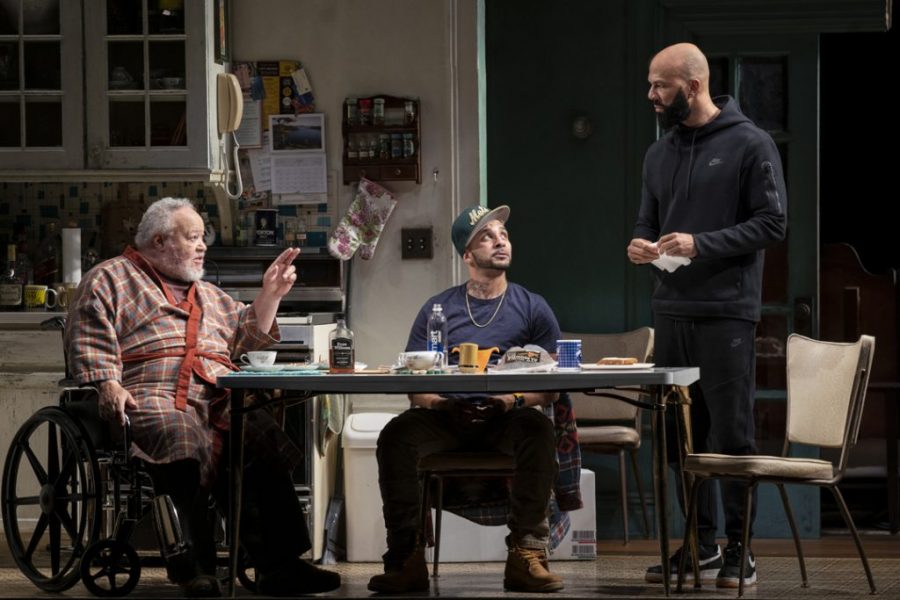 (l to r): Stephen McKinley Henderson, Victor Almanzar, and Common in BETWEEN RIVERSIDE AND CRAZY. Photo by Joan Marcus 2022.

“Between Riverside and Crazy,” the Pulitzer prize-winning play by Stephen Adly Guirgis, is currently making its Broadway debut, and people—especially New Yorkers—are raving. Although the play’s themes are universal, last Saturday night’s audience roared at the jokes targeted to NYC politicos, with busts on Rudy Giuliani in particular.

…about more than the troubles of one family tenant in rent-controlled upper Manhattan. It illustrates the systemic failures that affect so many lives, particularly minorities. It’s not afraid to go places that are seemingly hopeless, and it does it brilliantly with gut-wrenching acting.

“Riverside” refers to Riverside Drive that soon will become one of those gentrified neighborhoods in the city. My research never located the “Crazy” in the title, but this talented ensemble plays characters who aren’t crazy, but definitely characters.
Walter “Pops” Washington (Stephen McKinley Henderson) is a retired New York City policeman. His wife has died and his son, Junior (Common), has just been released from jail. They live in a rent-controlled apartment on Riverside Drive in New York City. Junior’s girlfriend, Lulu (Royal Colon), and Oswaldo (Victor Almanzar), a recovering addict, also spend time at the apartment.
No doubt Henderson will be nominated for a Tony Award. Recently widowed, he sits in his dead wife’s wheelchair and rules his extended family with tough love and more than a hint of revenge for his former employer—and for the owner of the building who wants him out. Pops says he will never drop the lawsuit and accept remuneration for his injury eight years ago. A White police officer shot Pops who was off-duty, coming from a bar in the early morning hours. He compares this “crime” to the current rage against Black men in America and he dismisses the payoff for his place by ignoring the eviction notices.
Rapper and actor, Common, makes his Broadway debut as Walter, Jr., an ex-con on parole and not quite living up to Pops’ expectation. Junior invites his prison buddy, Oswaldo, to live in his father’s apartment. and it doesn’t turn out well for Pops or the rest of the cast (who all have a back story of their own).
Nearly all the cast members from the original 2014 Off-Broadway production are back in this updated version, including Henderson and Liza Colón-Zayas as Church Lady, with her naughty influence on Pops. The banter between the two at the all-purpose table in the decaying apartment turns out to be one of those scenes you’ll always remember. The Church Lady is there to hear Pop’s confession and offer the Sacrament of Communion, but he’s only looking for sexual satisfaction. Both understand their roles well and deliver a verbal pas de deux that delights with some of the best jokes in the play. He balks at her medical assistance and has no interest in spiritual help. She, flashing a “I’ve got you” smile, pretends to want to help him change his ways, when all she really wants is his money. They end up on the well-worn couch with unexpected results.
The revolving living room set, where most of the action takes place, is a dump beyond repair. A dying Christmas tree sits downstage and brings little joy to the scene. Junior shares the bedroom with his pregnant girlfriend Lulu who befriends Pops. Pops seems to generally like her, though he won’t leave the apartment before he dies, despite her pleas to sign the release, like all the others.
Enter Detective Audry O’Connor (Elizabeth Canavan) and her fiancé who join Pops for what looks like a combination home-cooked and take out dinner. She urges him to accept the deal for the apartment as he barely makes the monthly rental. But she has other motives, too. Her fiancé, Lieutenant Caro (Michael Rispoli), has hopes of climbing the ladder at his precinct if he can clean up the messy paperwork Pops has refused to sign. The sticking point is Pops must agree that he was in the wrong when he was shot by the White policeman. After nasty comments and insults, Pops insists on a deal of his own with outrageous terms that cause additional havoc.
Applause to director Austin Pendleton who kept our focus on the cast at every turn. The original music and sound design enhanced the production, thanks to Ryan Rumery. Lighting Designer Keith Parham kept it dim to match the somber dialogue and bright when there was laughter. Costumes by Alexia Forte represented the period perfectly, as did the scenic design by Walt Spangler. It was a team effort that worked well throughout.
This was my first viewing of “Between Riverside and Crazy,” so I can’t compare the 2014 original to today’s production. Jesse Green of The New York Times wrote that it has been updated with recent references to Black Lives Matter but that doesn’t take away the problems of folks living in rent-controlled apartments and constantly facing eviction. It’s a play that gets you thinking which is the playwright’s intent.
In the end, nothing is resolved, yet you feel satisfied. When Pops take his bow on the balcony above the audience, you will smile with him. He makes a gesture that quietly says, “I’m not going anywhere” and we gladly accept his decision.
“Between Riverside and Crazy” is about more than the troubles of one family tenant in rent-controlled upper Manhattan. It illustrates the systemic failures that affect so many lives, particularly minorities. It’s not afraid to go places that are seemingly hopeless, and it does it brilliantly with gut-wrenching acting.
Running time: Two hours and 10 minutes with one intermission.
Advisory: Adult situations and profanity.