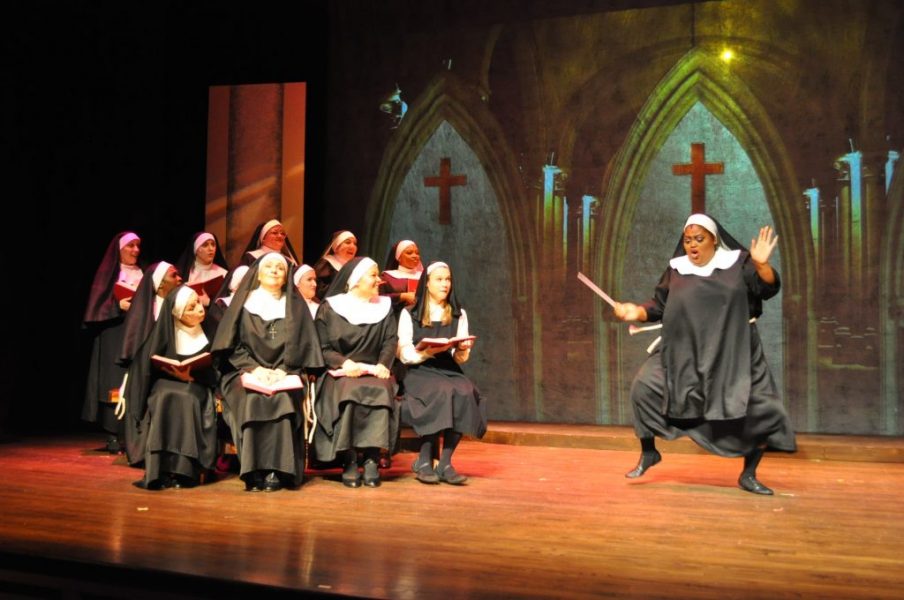 Something about the gentle poking at convention—even the spiritual type—provides a guilty feel-good to theatregoers. Filling the seats again and inducing groans and laughter, Little Theatre of Alexandria’s winter feature show is the musical “Sister Act.”

Let’s face it—nuns—especially the ones of the singing and dancing variety, are just gobsmack funny. There’s no way around it.

Williams has effortless vocal power…lights up the stage…has the nuns singing in righteous harmony and shaking it ‘like Mary Magdalene.’

“Sister Act,” adapted from the 1990 movie, had short London and Broadway runs and is the type of show that is easily packaged for adaptation. Also produced by Whoopi Goldberg, it contains some of the essentials but adds some of what people feel musicals need. Here, the action is infused with a funky, disco-themed score by Alan Menken and has more side stories out of nowhere than the original, which was more heartfelt.

Don’t get me wrong. The plot is clever enough, and if you missed the movie, you’ve seen different renditions of it in other genres. Lounge singer Deloris (the dynamic Ashley Williams) witnesses her mobster boyfriend murder a man and, fearing she’s next, runs to the police who decide to protect their new star witness by hiding her in a convent. While there, Deloris rescues the woeful choir by teaching them how to make a joyful noise through upbeat hymns rendered through buoyant soul music, and the church becomes a wildly popular destination of eager followers of the church of music. If you remember the movie “Some Like It Hot,” you will see it coming.

We first come upon our featured star Deloris open in her stage act in “Take Me to Heaven” with her co-singers—and she brings it. Williams has effortless vocal power and just enjoys being the attitude-driven diva. Her previous work playing the role is evident.

Taking refuge at the nunnery, she meets her nemesis, Mother Superior (a stern and unsmiling Christine Maxted). Other nuns are eventually fleshed out—the bubbly Sister Mary Patrick (Gina Tune) and the novitiate Sister Mary Robert (the affable Allison Meyer). Meyer has nice stage presence and a winsome look, yet there is a challenge sharing the stage with a dynamo singer such as Williams. Her rendition of “The Life I Never Led” was well-received.

Deloris conveniently meets up with high school flame and Policemen Eddie (a smooth and likable Alonzo Cook). His performance is commendable and his song “I Could Be That Guy” offers a smooth Motown style and features a great costume gag.

Deloris has the nuns singing in righteous harmony and shaking it “like Mary Magdalene.” Glenn Slater’s lyrics are full of zingers as they pivot between pious and party animal.

Fine work by Julie Fischer (set design), Mary Beth Smith-Toomey (Master Electrician), and others for the innovative use of scrim-lit backdrops showing various indoor and outdoor scenes. This technology enables seamless scene changes and a “large” feel for the show. Adding to the atmosphere was a surreal movement in some of the backdrops, especially waving pillars in the church scene. Some use of the A/V was overdone. Early scenes of Deloris escaping the mobsters showed her hilariously scampering outside the theatre. Later escapades went on a bit too long, as producers got caught up in the video chic.

“It’s Good to Be a Nun” and “Raise Your Voice” and of course, “Sister Act” are the bread and butter of the show, as the bombastic Deloris shows the nuns how to get down and give it to the Lord! There is a nice blending of voices in this choral style and the chorus is the core of this show. William’s energy lights up the stage, yet without knockout voices accompanying her, other songs fall a bit short.

Kathleen McCormick’s choreography provided tight, useful movement on what at times was a crowded stage and the music by Colin Taylor got the gals in the groove, combining a hybrid disco-Motown style.

I was almost converted!

“Sister Act” is runs through February 4, 2023 at the Little Theatre of Alexandria, 600 Wolfe Street, Alexandria, VA 22314. For more information and tickets, call 703 683-0496 or go online. LTA continues to require all persons attending performances to wear a mask indoors, including during the performance or event. Masks may be temporarily removed only while eating or drinking at events where food is made available to patrons.