Washington Shakespeare Company (WSC) offers The Gnädiges Fräulein and Portrait of a Madonna, two back-to-back one act plays by Tennessee Williams, that stand at the boundaries of the same psychological realism as his other well known plays like The Glass Menagerie and A Streetcar Named Desire. 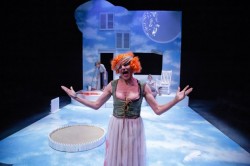 Tennessee Williams, the Tony Award and Pulitzer Prize-winning  playwright, was born into a family of wounded and disturbed figures that populated his plays. Williams often wrote about the two women who influenced him the most – his mother and his sister – and the chaotic drug induced world he lived in late in life.

The first play, The Portrait of a Madonna, was written at the beginning of his career shortly after his beloved sister was put into a mental asylum. The second play, The Gnädiges Fräulein, also has autobiographical references. Williams lived in Key West later in life, was blind in one eye and suffering from a broken heart when he wrote it. WSC blends both of these one act plays into an evening in which you experience some of the high and lows of Tennessee Williams’ life.

Portrait of a Madonna, written in 1941, focuses upon William’s characterization of his sexually frustrated and neurotic heroine, whose upbringing in pre-World War II southern society leaves her unprepared for life. In a dirty apartment, an aging Southern belle haunted by nagging romantic memories loses her grip on reality. The piece is plainly an early draft of Blanche Dubois, and Annetta Dexter Sawyer fearlessly moves around the set like a whirling dervish. Sawyer  throws herself into the role by calmly yet frenetically leading the audience into her version of the past and present. Slice Hicks delivers a compassionate performance as the Porter who shows concern for Miss Collins and her his possessions. The elevator boy (Bob Sheire) ascorbic character’s attempt at sarcasm was akin to adding salt to Miss Collins’ wounds.

The director for Portrait of a Madonna, Lynn Sharp Spears, uses three actors who pantomime how Lucretia’s lover jilted her for another woman. This brief vignette allows the audience to understand Miss Collins’ psychic remembrances and her pain of not experiencing the joys of being a woman and motherhood. The “virginal” white lace dress and youthful corkscrew hairstyle by Susie Graham and Elizabeth Jenkins McFadden, and Lauren Cucarola’s use of faded lace sofa covers and Life magazines – reinforce Miss Collins locked in time psychosis.

The Gnädiges Fräulein (“gracious young lady”) is an almost surreal farce reflecting Tennessee’s attempt at absurdist genre. Set on the “southernmost” tip of the United States on the fictional Cocaloony Key, the local society reporter Polly (Mundy Spears) digs up dirt at “the big dormitory” boarding house under “the rooftop of God,” a place where “the dark angel checks the residents’ dog tags” at night. Queen of her world – the boarding house – Emily Webbe practically channels Molly’s tremendous gift for storytelling and her southern accent. While riding erotic rocking chairs, the Greek chorus, Molly and Polly, watch the boarding house residents express soliloquies and battle a giant Cocaloony bird. The boarding house residents include a perfume-spraying, blonde-pigtailed Indian named Indian Joe (James Finely) and the Gnädiges Fräulein (Karin Rosinizeck), a delusional one-eye bloodied and washed-up performer who catches fish in her jaws for her keep. It is the story of the Gnädiges Fräulein and her long-ago unrequited love that seems to have driven her mad that serves as the plot device in this dark comedy.

Under Jay Hardee’s dramatic direction – a cocaloony bird swooping down on the Polly with a Hitchcockian terror of cawing crows and menacing shadows –  was brilliant. Polly’s soliloquy and the sounds and shadows of the unseen birds – grabbed the audience attention and set the pace for the second play. Elizabeth Jenkins McFadden set design of two rocking chairs on the porch made me want to set up a lawn chair and catch some rays. Jennifer Tardiff’s choice of dressing the Fraulein like a battered Bavarian ballerina wearing a tattered tulle skirt and blood stained white tights with bright orange color, added to the humor and the pathos.

Tennessee Continuum is playing through July 3rd in repertory with WSC’s production of Tom Stoppard Night and Day. Purchase tickets online, or call (888)-841-2787.