The idea of a multimedia performance involving live theater, film, and small venue concert performance is an intriguing one. Each scene in Table 8 starts in a small restaurant where we get the small glimpse into the seemingly small lives of the people that eat at the titular table. That scene is followed by a film that expands on the drama in their personal lives that happen after they leave the restaurant. The film is followed by a singer or rapper waxing philosophic about the previous scene. The execution, however, leaves much to be desired. 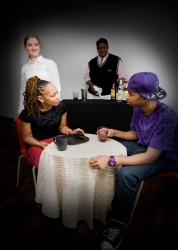 Let’s begin with the scenes in the restaurant. The waitress who is ostensibly taking care of the table on stage manages to give her lines no real focus or life. They are the generalities you will hear in any restaurant and no time is taken to move them beyond the prosaic into something worth hearing. Her facial expressions were a series of sour looks indicating that she had never had a decent table in all her career in the service industry. The actors on the stage generally lacked energy and an ability to engage the audience.

Next we have the filmed scenes. These needed a lot of work. Every time the camera shifted, which it did continually, or an actor moved, the screen became blurry and distracted from the action. The scripts were long winded and weighed down with far too much exposition and not enough happening on the screen. The plots were predictable and read more like a soap opera that the dramatic interludes they were intended to be. The third leg of each scene was a singer of some sort. While the voices were good, the songs were too long and drew me out of the action of the play. Finally, a note on the overall production: This was a seventy minute play in which there were twenty minutes of dead air due to dropped lines and extensive set changes. The play ends with the cast yelling at the audience to tip properly – and I left after the first three minutes of curtain calls.