The Importance of Being Earnest at Scena Theatre

Oscar Wilde is well known for his delightfully witty shows, but Scena Theatre’s production of The Importance of Being Earnest applied comical gender role swapping to create one of the funniest shows I’ve ever seen. From the very first moment, audience laughter was a non-stop soundtrack to the show and some viewers could barely control their tears of joy. Artistic Director Robert McNamara’s sex switch-up is a ‘Must See’, a smash hit and easily
raises the bar for future Wilde shows in DC. 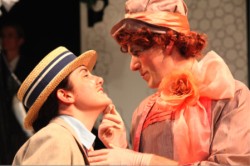 Anne Nottage as Jack and Tyler Herman as Gwendolen in Earnest. Photo by Don Summers.

Sara Barker (Algernon Moncrieff) and Anne Nottage (John Worthing) started the show off on a high note with their impeccable male presence. They captured every essence of man; the slouching, the attitude, even the natural adjustment men often find the need to make. They doted on their respective love interests Tyler Herman (Gwendolen Fairfax) and Edward C. Nagel (Cecily Cardew) and both mismatched couples took advantage of natural
chemistry. Herman and Nagel’s mincing steps couldn’t help but incite laughter,
and just the sight of them clutching each other created a chorus of chortles
every time.

Brian Hemmingsen (Lady Bracknell) easily won the audience’s hearts as the indomitable matriarch, a role he was born to play. Just one look at his hands in grey, elbow length gloves convinced me that Costume Designer Alisa Mandel was a master. Hemmingsen quickly stole the show whenever he was on stage and waltz his way through Wilde’s snarky dialogue without a care in the world.

The perfectly matching Mary Suib (Merriman) and Sissel Bakken (Lane) rounded out the cast as the perfect gentlemen’s butlers. With nary a scathing look, Suib and Bakken managed to convey their absolute disgust with their master’s hijinks, without ruffling a single feather. Despite their limited roles, both actresses constantly made their presence known is clever ways, another testemanet to McNamara’s genius.

The Importance of Being Earnest information and tickets.