Theatre Kibbitz: A Chat With Audra McDonald On Her 10/4/11 WPAS concert at The Kennedy Center and ‘Porgy and Bess’

She’s a 4-time Tony Award winner, and is now performing in Porgy and Bess in Cambridge, MA, which is en route to Broadway. On October 4, 2011, Audra McDonald returns to The Kennedy Center to perform at Washington Performing Arts Society (‘WPAS’), in the Concert Hall.

I talked to Audra about what she’ll be singing at her concert and preparing for her new role as Bess in Porgy and Bess, which has been ‘reimagined’ by Pulitzer Prize-winning playwright Suzan-Lori Parks, and directed by Diane Paulus, who directed the Tony Award-winning revival of Hair. The show is now playing at American Repertory Theater, in Cambridge, Massachusetts through October 2nd.

Joel: We are so happy that you are coming back to DC. Why do you enjoy performing at WPAS and at The Kennedy Center?

Audra: The Kennedy Center is such a special place for me. I did Master Class there. I have sung at The Kennedy Center Honors. I sang with Barbara Cook there. The audiences who come to my concerts there are so great they really enjoy it and excited to be there, and they are very participatory, which I like, so I just enjoy performing there.

What will you be performing in the concert on October 4th? Is there a theme that runs through your program?

The theme is ‘songs that Audra loves.’ The songs represent all areas of musical theatre and The American Songbook. I will be doing songs from Kander and Ebb and Cole Porter, singing old WWII songs, and some songs from new musical theatre composers. I’ll also be playing piano.

For me what I always hope is that the audience feels like they are sitting in my living room, and we are having a good time singing and chatting. That’s what I feel like when I do this program.

Ted Sperling is usually your Musical Director. How long have you been working together, and why do you enjoy working with him? 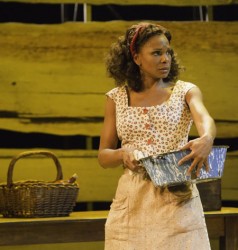 Audra McDonald as Bess in "Porgy and Bess'. Photo by Michael Lutch.

I’ve known Ted for over a decade and he’s an incredible Musical Director and musician. Ted recently became a Daddy to two beautiful twin baby girls with his partner Noah. For this particular concert I will be working with Andy Einhorn, who I have been working before. I will be performing with my trio.

You are taking this show to 17 cities, including a stop at Carnegie Hall on October 22nd. Where do you take the show after the Kennedy Center stop?

I haven’t started the tour yet because I am here in Cambridge doing Porgy and Bess. I start the tour next Saturday night in Philadelphia. So, I will be in Philadelphia, Boston, Washington, DC, Princeton, Michigan, Southern California, and Vancouver, lots of places down south – all over the map.

You are appearing in a new production of Porgy and Bess which is now in Boston before the show comes to Broadway on December 17th at the Richard Rodgers Theatre. Are you still performing the show in Boston?

What is it about this production of Porgy and Bess that makes it so unique?

For many years, Porgy and Bess had remained in the opera house, and the Gershwin estates have given us the permission to make a version specifically for a musical theatre audience for Broadway.

When one goes to the opera, the music is king. One of the big differences is the conductor of any opera is the boss and what he says goes. On Broadway, it’s the director – so it’s very different, so the recitative becomes written dialogue. We took a look at many things that for years people said were controversial, and some people would consider – including many African Americans who portrayed these roles – as racial stereotypes. We took out some of that and focused on the characters and the story – making that the most important thing.

How are audiences reacting to your performance and the production in Boston?

They have been amazing. They have been ecstatic every single night! They’ve been rapturous and very generous in their response. It’s been overwhelming.

How many performances a week will you be performing?

I will be performing 8 performances a week, and yes, it’s incredibly demanding. It’s a very hard role.

What have you learned so far about Porgy and Bess and your character that you didn’t know before you became involved in this production?

There’s still a lot about Bess that is a mystery to me. I am still figuring her out. The one thing I have lately come to understand about her – and it may seem simplistic – she really is an addict. Addiction is a ‘handcuff’ that it puts on someone. In this day and age from there is so much psychological information about addiction – including studies on brain function. I have just really begun to understand all the things about being an addict encompasses – going from one addiction to another. With Porgy, she needs to grab onto something, to hold on to it and immerse herself in it. So I am learning more about that lately.

How do you think this new generation of theatregoers will be able to relate to Porgy and Bess, since it was written in 1935?

It’s still a powerful love story. I think love transcends time and generations. And the characters are people you can root for. Porgy – when he gets together with Bess -certainly has a lot of potential to improve as a person and he is overcoming his physical disability and making himself more of a man – and those are things I think people can identify with.The power of love to heal is timeless.

I am a huge fan of Norm Lewis. What has surprised you so far about his performance of Porgy? 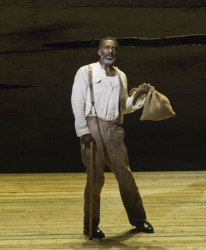 Norm Lewis as Porgy in 'Porgy and Bess'. Photo by Michael Lutch.

Nothing. I’ve known Norm for over 20 years and he’s always incredible. For a lot of people –they will see what an incredible actor he is. This is a role that can really show him off – everything that he does beautifully. It’s such a joy to be on stage with him every night. We just love playing these roles together every night.

You are one of the Musical Theatre Leadership Award Recipients at Signature Theatre. Tell us about that.

Signature is an incredible organization and are supported so well by the community, and I believe in the work they are doing.

I saw you in Ragtime in Toronto and in NYC so many times I have forgotten the exact number. Ragtime  is now being produced every, and it’s being produced in schools all over the world? Why do you think it’s ‘caught on fire’ all of a sudden?

It’s a beautiful show. You go to the theatre to be moved, to have an experience. It’s such a wonderful thing theat they are doing it in schools. It’s a great way to give students an American history lesson. You learn about J.P. Morgan, Henry Ford, and Emma Goldman – that’s a history lesson and what better way to do it while experiencing the power of theatre?

Is your daughter Zoe showing any musical interest? Has she inherited your vocal genes? 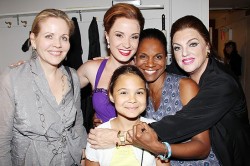 She has a great voice and plays the violin and saxophone and the piano. Her Dad [Peter Donovan] plays bass, so she has the music interests.

What would you say to a student who is considering a career in music, singing and/or in the theatre?

Get on stage wherever you can. It doesn’t matter where – as long as you get on stage – community theatre, a  church production, or a school production, whatever. It’s the best teacher you will ever have.

Here is a special offer for $29 orchestra seats for Audra McDonald’s October 4, 2011 concert – at WPAS at The Kennedy Center’s Concert Hall.

Watch a rehearsal video of Porgy and Bess.

Watch a two-part in-depth look at Porgy and Bess in Boston on WGBH, which features interviews with Audra and the cast, and highlights of the production.

Part One and Part Two.

Watch Andy Einhorn trying to teach Leslie Kritzer (playing Liza Minnelli) her songs at Sondheim on Sondheim where he was the conductor). It’s all untrue and really silly.