A View From The Bridge at Rockville Little Theatre

Rockville’s Little Theatre begins its 2011-2012 season with Arthur Miller’s A View from the Bridge, and what a powerful production this is! It goes without saying that Miller’s well constructed tragedy is the time tested foundation for this production. However, Malca Giblin, Elaine Hoover (Producers), and Kevin O’Connell (Director) should be very proud of this show. 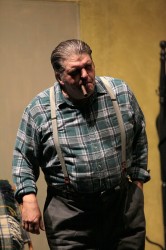 Arthur Miller’s tale takes place in Brooklyn, specifically the Red Hook area of Brooklyn during the late 1950’s.  Literature in the lobby of the F. Scott Fitzgerald Theatre informed me that the Red Hook area, during the late 1950s, was primarily populated by Irish and Italian immigrants. The area was near the docks and most of the men from the neighborhood worked as longshoremen, a rough and tough career.  The drama’s protagonist, Eddie Carbone, is one such longshoreman.

Eddie is a hard-working, decent, well-liked, and pretty ordinary resident of Red Hook. Eddie (Michael J. Galizia) and his homemaker wife Beatrice (Alyssa Sanders) have charitably been raising his orphaned niece, Catherine (Lizzi Albert). All seems a very wholesome and happy family life at the Carbone’s home. Catherine is beginning to make her way in the world and is busy designing a career path to which her overprotective uncle eventually relents to.

Catherine and Eddie have a close relationship, but one which is changing and difficult to discern. Is it a parent-child interaction or a more adult relationship? Eventually this relationship becomes the focus of the drama. Eddie and Beatrice accept to house her Italian cousins who illegally immigrate to find work to support their families back home. These brothers, Marco (Heath Dillard) and Rodolpho (Jeff McDermott), are widely separated in age, physicality, family status, and disposition. Where Marco is physically strong, quiet, and an aggressive financial saver for his wife and children back home in Italy; Roldolpho is single, carefree, and inclined to music, dance, and entertainment.

Besides the excellent plot and drama, what makes this production of A View from the Bridgeso engaging – is the wonderful cast and the attention to detail! All of the primary actors (really) are engaging and convincing in their roles, whether it be as a Brooklyn housewife or a just off the boat immigrant from Sicily! You can’t single out a single cast member for accolades, as they are all just wonderful in their portrayals!  It’s difficult to realize that this is a play and you are not observing an actual event. 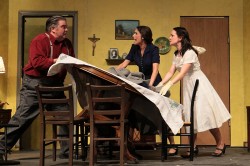 Dialect coach Gary Sullivan should be extremely proud as Galizia (Eddie), Sanders (Beatrice), Catherine (Albert), and Marco (Dillard) were entirely believable as natives of Brooklyn or Italy.  Having close friends that are of Italian heritage, but from Queens, I was only convinced that these actors hailed from their storied lands.

The costumes by Sarah Kendrick and Charlotte Hankin were accurate and period specific. I am not sure if these were created or if original pieces were acquired, but the dress was accurate to the specific time and even the colors of the ladies dress (which is often “enhanced” for modern audiences) were realistic and authentic.

However, even more attention to detail made this play a treat. The Set Design was very innovative and creative, thanks to the attentions of Set Designer Bill Brow and Lighting Designer Peter Caress. When you first view the set, prior to the show, the environment appears to be a 1950’s household apartment with (again) very authentic furnishings and ambience (kudos also to Set Dresser Nancy Eynon). A radio plays classic hits of the 1950s and lighting is similar to any evening at home during that period. However Brown uses his professional architectural expertise to design a multi-dimensional set that allows for multiple focuses to occur without distraction. You find the set craftily employs niches and levels to reveal neighborhood environments, the exterior hallway of the apartment, Alfieri’s legal office, and a stairwell to the apartment’s basement level. Combined with specific lighting, this set can spotlight a specific background or create a global backdrop for many simultaneous activities. Really ingenious! 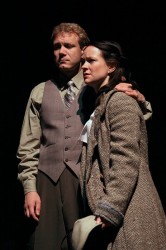 Lizzi Albert as Catherine and Jeff McDermott as Rodolpho. Photo by Dean Evangelista.

Most of the details, for me, added to the experience and really enveloped me into the play. However like the qualities of a significant other, the differences you may first find endearing can also become a bit irritating after time. I truly loved Kevin O’Connell’s direction because it provided period authenticity and accuracy.

In this day of high tech, it was wonderful to have a production where microphones were not employed. Actors truly had to use the technique of voice projection. This is great if you are younger or have excellent hearing. Yet a great majority of the audience were in the “seniors” category, so this may indeed be a limitation for some of the audience members…as a few cast members were difficult to hear. Also most scene transitions were smooth and immediate; those that required some staging and furnishing changes (specifically those requiring the addition of the heavy legal desk) seemed slow and distracting.  Again I admired the quest to stay true and authentic…but perhaps some of the scenes could use some less authentic background to decrease the disparity between the rapid and longer episode segues.

Overall this was a gem of an experience and I urge all to see this great community production.