Theatre Kibbitz: Director Matthew Randall on ‘Take Me Out’ at Dominion Stage

My introduction to Richard Greenberg’s Tony-Award winning Take Me Out was the Studio Theatre’s excellent production in May of 2005. Greenberg’s plays, including personal favorites The Violet Hour and Three Days of Rain (both produced in recent local productions) feature contemporary, witty dialogue, innovative situations and fascinating, believably flawed characters. 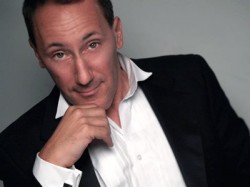 As a title, Take Me Out covers all the bases, pun intended. Darren Lemming, star player for the world-champion Empires Major League Baseball team, casually outs himself at a press conference, setting in motion the action of the play as reactions vary widely.  Eventually, he claims to want out of baseball, his multi-million dollar contract and the trappings of fame. At the other end of the spectrum, business manager Mason Marzak enthuses that baseball and Darren take him out of what was previously “a ridiculous life.” Short Relief pitcher Shane Mungitt, whose job is to take out the batter, embraces the concept with both simple- and single-mindedness – and shocking results. Finally, a production which calls for appropriate male nudity in shower and clubhouse scenes will perhaps take some actors and audience members out of their respective comfort zones.

Greenberg’s intelligent script provides plenty of humor to offset more serious themes, with some characters and dialogue played for maximum hilarity. Other humor is darker and more subtle.

One of the strongest themes is that of the Other, or outsider. Darren Lemming is bi-racial; he is a famous and wealthy athlete; he reveals he is gay. His best friend Davey Battle is deeply religious  Shane Mungitt is an orphan. Mason Marzak is a loner, likely Jewish, clearly gay. The Empires roster includes players who speak only Spanish and one who speaks only Japanese. When Mason admits that he is “possibly beneath” any community, Darren counters “I don’t really have a community, either. I’m above them.” When asked by the press if he is black or white, he replies “I’m black and white.” It’s a matter of perspective, yet another theme. Darren’s struggle to reconcile how he views himself with how he is viewed by others lends humanity to a seemingly arrogant and aloof personality. 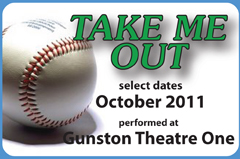 Like a good ball game, Take Me Out offers the fans a winning combination of drama and suspense, memorable personalities (and physiques), and occasional agony alternating with bouts of exhilaration. True to Dominion Stage’s mission to remain “Anything But Predictable” this entertaining production is the perfect opportunity to take someone out.

Take Me Out plays from October 7th to the 22nd, at Dominion Stage at Gunston Arts Center – Theatre One – 2700 S. Lang Street, in Arlington VA. Buy your tickets online.