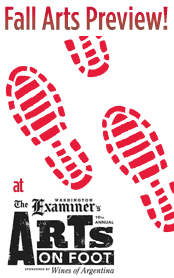 The festival offers visual and performing arts, culture, cuisine and interactive experiences for all ages. Over 15 area theatres and performance groups will participate this year, including the Shakespeare Theatre Company, to foster connections between artists, performance groups and audiences and to display the work of local talent. ARTS ON FOOT Fall Arts Preview performances will take place on Saturday, September 10, 2011 from 12:30 p.m. to 6:30 p.m. at Sidney Harman Hall (610 F St., NW).  Admission is free and on a first come, first served basis. Seating will begin at 12:00 p.m.

Coinciding with the ARTS ON FOOT Festival, the Fall Arts Preview at Sidney Harman Hall will consist of performances from various local performing arts organizations. Across six performance times, the Preview will present a wide array of theatre, dance, comedy and choral music on two stages. Many of the performances will consist of staged readings or previews from upcoming season performances.

Beginning at 1:30 p.m., The Forum in Sidney Harman Hall will host Faction of Fools, Victoria Vox and Furia Flamenca-A Flamenco Dance Company. Performances will continue at 2:30 p.m. on the Sidney Harman Hall Mainstage with a theatre performance by Woolly Mammoth Theatre Company.

Other performances for the hour include the Domingo-Cafritz Young Artist Program from the Washington National Opera and the Washington Ballet. At 3:30 p.m., the showcase continues in The Forum with a presentation from UrbanArias and Ballet Teatro Internacional. At 4:30 p.m., the Sidney Harman Hall Mainstage will feature theatrical performances from Ford’s Theatre and Theater J, as well as performances from Edwin Aparicio Flamenco, WPAS Men and Women of the Gospel Choir and Gay Men’s Chorus: Potomac Fever. The final showcase will begin at 5:30 p.m. in The Forum with mix of dance and theatre with Gala Hispanic Theatre, Forum Theatre and Eureka Dance.

The Fall Arts Preview at Sidney Harman Hall is funded by the DC Commission on the Arts & Humanities, an agency supported in part by the National Endowment for the Arts.

PARKING:
Paid parking is available at the LAZ garage located directly beneath the Sidney Harman Hall and AARP Headquarters block; enter from E or F streets between Sixth and Seventh Streets.

METRO:
Gallery Pl-Chinatown station on the Red/Green/Yellow lines: Use the Arena/7th Street exit. Sidney Harman Hall is visible one block to your left.

Judiciary Square station on the Red line: use the F Street exit to the National Building Museum, turn left and walk 1 ½ blocks along F Street to 6th Street. For Further information, call Metro at 202.637.7000.

PARKING:
Paid parking is available at the LAZ garage located directly beneath the Sidney Harman Hall and AARP Headquarters block; enter from E or F streets between Sixth and Seventh streets.

*Thanks to STC’s hard-working Megan Griffin, who sent me this information.