Feel the light of the world as Vagabond Players, Inc. goes day by day into its 96th season with their production of Stephen Schwartz’s popular musical Godspell, directed by Eric J. Potter. The musical numbers will mesmerize you, the ensemble will blow you away, and hang onto your hats for all the hilarity that arises in this particular production. All of the signature moments from the show are easily recognizable, from the audience interaction, to the moment they start playing charades, and the way they start dancing in the aisles during “Day by Day.” With musical direction provided by Douglas Byerly – the show delivers in every way expected, living up to its name as the “Great American Rock Musical.” 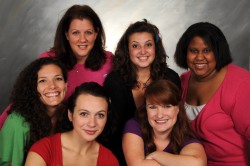 The show could happen anywhere, in this case a derelict abandoned theatre, with parables from the Gospel according to Saint Matthew driving the action in the show. Enter Jesus and his teachings told through those parables and watch as his followers learn their lessons well. The show would be remiss without the brilliant mind of Marie Rogers, the innovation behind the spectacular costumes. While the cast starts in basic blacks and white phantom masks they quickly evolve into a plethora of wild and crazy outfits. Gold lamé pants, rainbow tie-dye skirts, patchwork suit jackets, brightly checkered socks, a red and black zebra-striped pimp hat, and a glittering leopard print dress are just a few of the delicacies to look forward to in this eye-catching wardrobe. Rogers has put clear effort and intent into making the ensemble stand out as far as the eye can see, and you can’t help but wonder if you’ve stumbled into a production of Joseph and the Amazing Technicolor Dreamcoat from the vast array of colors and patterns used throughout the show. 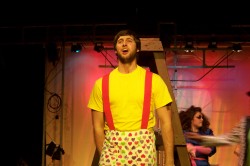 But the true talent glitters from the performers. A powerful ensemble that easily moves as one when they dance and sing, supported by a strong Jesus (played by Dan McQuay) and several talented soloists featured throughout the performance. McQuay, stepping into the role just days before the production opened, delivers a humbling performance as Jesus. He preaches with conviction and yet still has the jovial sense of playtime felt among the ensemble. He switches easily from upbeat and active to sullen and morose as the play progresses. His shining moment comes in Act II during his featured solo, Alas for You, where McQuay fills his song with such passion and reverence for the words he is singing – that you can’t help but burst into heartfelt applause at the close of the number.

But watch out because Maggie McQuay, member of the ensemble and sister to Dan, steals the opening of Act II with her wild and wanton performance of “Turn Back, O Man.” All eyes are on Maggie as she slinks down the aisle from the top of the house exuding pure sexuality and belting out every note. Watch out for other moments stolen by Maggie as she hams it up singing and dancing long after certain songs have ended. A real scene stealer!

Maggie McQuay, however, isn’t the only one stealing the scenes. Soloist Lauren Spencer-Harris takes her own moment in the limelight during her solo early in Act I. Her powerful voice radiates through the house with exuberant spirit and all the while she keeps a huge smile on her face, thoroughly enjoying her role. Her voice can be heard leading the ensemble in the group numbers, giving strength to the show through the power of song. 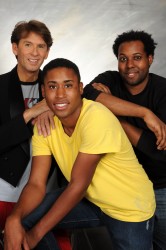 And if you’re looking for the laughs you’ll find it in Sarah Ford Gorman and Brandon Shaw. These two ensemble members deliver unparalleled physical performances and hilarious facial expressions. Shaw (during one of the parables that he pantomimes while another member of the ensemble provides his voice over), has such over-dramatic facial expression, combined with modern day attitude and gestures that you can’t help but burst into laughter. His body is fluid as he dances and his eyes express so many emotions that he is a true delight to watch. Gorman is a bright bouncing ball of energy as she bounds and cartwheels across the stage, physically exerting herself to the point of ridiculousness. Keep your eye out for these two talented actors.

There are several things that will distinguish The Vagabond Players production of Godspell from other productions, one of them being the children. They are on stage, just like the rest of the ensemble, to learn the parables from the gospel. These four young actors (Olivia Aubele, Matt Demetrides, Rachel Miller, and Zach Miller) provide quite the endearing performances. Demetrides sings beautifully, his sweet voice filled with emotions during his somber performance of “On the Willows.”

But the real distinguishing factor in this show is all of the not-so-subtle modern day madness that the director has slipped in throughout the production. You encounter Jesus preaching to Sarah Palin, Barack Obama, and Charlie Sheen. One of the parables is told with sock-puppets and the best part of all come from the numerous musicals mentioned throughout the show. Potter must have taken painstaking efforts to research Broadway musicals and match them up with each of the parables but it is definitely worth it. As most of the stories unfold the ensemble pays small tribute with lines sung from varying musicals (I counted at least 8 and I’m sure I missed some). It adds to the hilarity and has the audience rolling with laughter when they burst into numbers from Annie, Les Miserables, Fiddler On The Roof, and many more. Truly a creative genius, Potter guides the cast into a sign language interpretation during the number “Day By Day.” It’s beautiful.

So if you need a spiritual uplifting tale, a good laugh, or a night out at honest-to-God live theatre, we beseech thee to come down to the beautiful city of Baltimore, drop into The Vagabond Players, Inc. in Fells Point and experience the joy in this heavenly production  of Godspell. 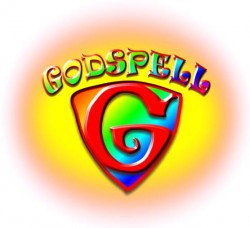