The Birds at George Washington Carver School for Arts and Technology

“Undoubtedly, words give wings to the mind and make a man soar to heaven.”
Aristophanes, The Birds

George Washington Carver Center for Arts and Technology in Towson, Maryland houses a well-respected theater program prime for qualifying students. Their first production for this season is The Birds, an ancient piece of social satire written in the year 414BC by Greek dramatist, Aristophanes (as adapted by William Kerr). The message of the show is timeless  – man’s search for Utopia. The young actors deliver it with comedy, flair, and surprisingly, funk, thanks to selections by Talking Heads, a clever addition to the play by Director Jeffrey Harris. 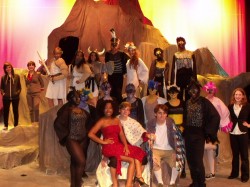 The cast of ‘The Birds.’ Photo by Ava Ertel.

The story begins with two self “anti-government men”, Pithetaurus (Brandon F.) and Euelipides (Alex W.) traveling to flee Athens, “the land where everyone has the right to pay taxes and ruin himself,” in search of the King of the Birds, Epops (Christian M.). Together they plot to found a city in the air run by the birds that they hope even the gods will revere. The two lead characters have great onstage chemistry. Euelipedes offers much of the show’s comedy, as he plays off of Pithetaurus’ lofty aspirations and plans. The formidable chorus of birds adds real punch to their scenes with powerful physicality and spot on delivery of the choral dialogue.

By the second act, the city of birds, ‘Cloudcuckooland,’ becomes a success, leading to adulation by the humans, and eventually acceptance by the gods. Pithetaurus finds himself in love with Iris (Ashley S.) and strikes a deal to make her his bride, with yet another scheme.

Some excellent comedic moments are found in act two, particularly the fashion runway worthy introductions of the gods. The performance is both fearless and animated. Cawing, singing, and squawking their way through this cerebral tale with spirited zeal, the well-rounded ensemble give new life to what was written over 2000 years ago.

The set remains constant throughout the play, allowing for the action to flow continuously. The design and production team (scenic design  is by Erika B. and company) constructed an impressive piece of work that consists of one massive and stark creation: a two story, multi-level gray mountain. The director and choreographer (Joseph R.) capitalizes on the space and levels, through blocking that has the birds scampering, leaping, and dancing with freedom. The bird’s dances and singing infuse even more vigor into this lively staging. The partner dance in act one between Epops and his mate the nightingale (Annie U.) is particularly fun and lovely.

Simple pieces are the basis for the costume design (team led by Kiara D.), with extensive accessories, such as feathers, headpieces, and paint applied to fabric to enrich the colorful garments. The costumes are enhanced by elaborate makeup (Anya S.) true to each bird’s species. By appearance alone, this group of fowl looks convincing. The characterizations added by the actors put the performances over the top making for a cohesive spectacle.

The Birds at Carver Center is quite an achievement, notwithstanding the fact that it was put together in less than two months by this group of incredibly talented youth. In their capable hands, this Greek classic is injected with humor, energy, and spunk, making it current and cutting edge.

The Birds plays through October 22, 2011, at Carver Center for Arts and Technology – 938 York Road, in Towson. MD. Tickets may be purchased at the door.