The madness of Don Quixote – as told by Cervantes – comes to McLean Community Players’ stage in their production of Man of La Mancha. Directed by Don Petersen with musical and vocal direction provided by Walter McCoy and Rosemary Dyer – the show tells the tale of the man who longs for adventure, pines for chivalry, and sets off on a quest to become an exalted knight. It’s a play-within-a-play setting: as Cervantes (Mike Baker Jr.) is tossed into a prison to await the Spanish Inquisition, the tale of Don Quixote unfolds as Cervantes stands trial before his peers. 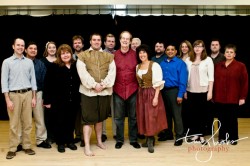 This particular production, however, falls short of the brilliant delusions created in Cervantes tale, and the only thing maddening about it is the poor directorial and acting choices made consistently throughout the show. We meet Cervantes (Mike Baker, Jr.) as he is tossed into the prison and he quickly sets to transform himself into the man of his story, Don Quixote. While Baker does don a fake beard, mustache and hairpiece – this is the only transformation the audience sees when he moves from one character to another. Although e sings in a beautiful high tenor, Baker lacks emotion when he sings – we hear the song but don’t feel anything radiating from the performer, which is a severe disconnect for the audience. Baker also has trouble keeping rhythm with the live orchestra during musical numbers, such as “Man of La Mancha,” and “Golden Helmet of Mambrino,” but this was a problem for the entire cast – being ahead of the music or behind it and then frantically trying to catch up.

We see similar casting issues with the female lead of Aldonza (Janice Rivera. Those that know the musical or even who have had simply read the story expect a rough and gritty character from the scullery maid turned whore -; but here Rivera’s performance is sweet and gentle. During her main song “Aldonza” her voice is more suited to an operatic aria than the rough words she is singing. The sweet demure nature that Rivera finds in the character at the very end of the show seems to have permeated the character and taken over. I wish we had seen a more tougher and grittier portrayal. Rivera seems over-rehearsed at times, responding to the lines before they are fully sung during the number “The Missive” sung by Sancho. (Nathan Tatro.) And like Baker, Rivera gets both ahead and behind of the live orchestra, which is truly a shame because the orchestra is well-tuned and plays the music of the show with precision and perfection. It’s a shame because Rivera has a fantastic voice.

The staging is probably the most disappointing and distracting problem throughout the entire show. They have a vast space with which to work – a stage on top of a stage that extends outward into the audience as well as a staircase they have added to create the illusion of the prison. But whenever large groups of people are onstage they are all standing in straight lines, or are clumped tightly together in one little area of the stage. They made no use of the stairs other than to march Cervantes (Baker Jr.) in and out of the prison where they could have used this set piece as a space for the prisoners to sit and watch the tale as it unfolds.

Director Don Petersen made further choices that were confusing and distracting – having the female ensemble members placed along the aisles throughout the show without them having a purpose of being there. I expected that they were going to interact with the audience or something – but instead they just stood there waiting for the moment they joined in an ensemble number, almost as if they’d run out of room backstage to hide them. It wasn’t until the finale that the stage’s vast space was put to use with everyone finally spreading out across it and in staggered naturalism rather than the stick-straight lines seen throughout the production. 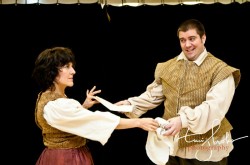 Sancho (Nathan Tatro) and Dr. Carrasco (Lance Adell) are the two performers who attempt to really create characters rather than just recite their lines and sing their songs. Tatro has vibrant facial expressions and lives up to the naïve gaiety of the little man who follows Don Quixote wherever he roams. His song “I Like Him” is boisterous and full of spirit and his interactions with others are lively and entertaining. Adell is firmly grounded in his portrayal of Dr. Carrasco and when he storms the stage as the ‘Knight of the Mirrors’ he is commanding and intimidating even for those of us who do not have demons to face in his mirror shield.

I am generously adding an extra star to the rating of this show to commend the tireless efforts of Tatro and Adell in baring the weight of the entire production on their shoulders  – in an attempt to bring forth some enjoyment from this popular musical.

I know that opening nights are stressful, and I am confident that with so much good talent onstage – the show should and will improve.

Man of La Mancha plays through February 11, 2012 at the McLean Community Center’s Alden Theatre – 1234 Ingleside Ave, in McLean VA. For tickets, purchase them online or in person at the box office – as early as 2 hours prior to showtime.