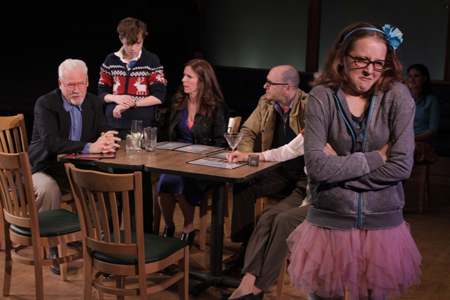 The Big Meal, written by emerging playwright Dan LeFranc received many critical accolades during its world premiere run in Chicago and very recent Off-Broadway run, including Drama Desk and Lucille Lortel award nominations for Outstanding Play.  It’s quite easy to see why.  The script is engaging and innovatively constructed.  The story told is also relatable.  Certainly, that ‘relatability’ may be part of its charm.  Now receiving its Washington DC premiere at Studio Theatre (2ndStage) it’s very likely that the play will continue to charm area audiences, especially given the strong cast involved in bringing it to life.

In this play, LeFranc follows one family through multiple generations.  This quick examination of familial relationships is kindled by a very typical meeting of a guy and a girl (Sam and Nicole) at a non-descript family restaurant.    Though hesitant to form a solid bond at first, their meeting leads to an engagement, marriage, and eventually, the starting of a family.   As the audience goes on Sam and Nicole’s life journey with them after they meet one another, it also witnesses the circle of life as Sam and Nicole experience it.  Parents die, children are born, and those children develop relationships, marry, and start their own families, and so on.   One element stays the same throughout the story. They partake in ritualistic family dinners at the non-descript restaurant where they first met. 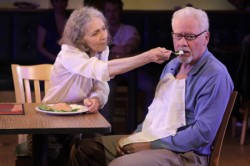 Annie Houston and Matt Dougherty in 'The Big Meal.' Photo by Carol Pratt.

The family portrayed in LeFranc’s script could very well be any American family.  After all, virtually every family is touched by any or all of the circumstances that are at play in Sam and Nicole’s- cancer, dementia, deteriorating marriages, alcoholism, tensions between parent/child about who to date/marry, single parenting, the decision of a son to join the military etc.   Though LeFranc’s decision to include nearly every possible up and down situation a family can encounter may ensure all audience members immediately ‘recognize’ at least one of the characters on the stage, there is a downside.  All of these situations arise in the span of a very short 80 minutes of admittedly catchy and natural rapid-fire dialogue.  The idea to choose to tell the story with a sprint instead of a marathon is both a blessing and a curse.

Because each life or death circumstance the family experiences comes to the forefront for 5 minutes or less, it’s hard to focus one’s attention on each circumstance and feel much of anything for the character or characters experiencing it.  This unfortunate situation is compounded by the fact that, apart from Sam and Nicole, the audience only gets to know each character at a surface level.   Likewise, a joyful situation is immediately followed by a painful one, which can be immediately followed by another painful or joyful situation.  By the time one realizes which life-altering occurrence is happening and the impact it will have on the family, the focus has again shifted.  Perhaps this is intended to illuminate the nature of life- that situations can turn on a dime, that our existence is merely a moment, and that we are but one small part of a whole.  Nonetheless, a secondary, and perhaps unwanted, consequence of LeFranc’s decision to focus ‘everywhere and on everything’ is an unnecessarily complicated and schizophrenic telling of a very simple, yet compelling (though at times overwrought) story.    The play’s construction could be considered genius, but it also could be considered a hindrance to effective story-telling.

Luckily, the actors that Johanna Gruenhut (Director) has brought to this project are up to the monumental task of acting out this roller-coaster of a story.   Each actor plays multiple characters and multiple actors often play the same character at different stages of that person’s life.  This casting decision is one of the more interesting aspects of LeFranc’s creation.  All of the actors largely remain on stage throughout the course of the play; when not partaking in a scene, they sit on a bench in the family restaurant and observe the action.  This device allows for some continuity to be achieved as generations pass on and new ones emerge.  It also allows the cyclical nature of familial relationships and situations to be the driving force of the play. 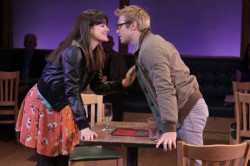 The eight member ensemble cast (with a ninth cast member, Sarah Taurchini, taking on the role of a server at the restaurant), is very much a cohesive unit though their ages span several decades.  There’s not a weak link among the cast members though I found Ashley Faye Dillard (Young Woman) and Josh Adams (Young Man) best equipped in displaying a wide emotional range.   Dillard very naturally takes on the role of a young, energetic, and independent Nicole at the beginning of the show and is equally comfortable taking on the role of a single mother dealing with many personal struggles in the latter half.  Adams takes on the role of a young soldier reeling from a heart-breaking loss in the latter half of the show.  Given his intensity and commitment, he made me care about the young man in a way that I did not with the other characters.  That’s certainly not an easy feat to accomplish in several minutes.  He is equally engaging as the young adult Sam and demonstrates great rapport with Dillard whether he is playing her lover, brother, or another familial relation.

Hyla Matthews (Woman) is most effective when playing middle-aged Nicole.  She offers a grounded take on motherhood and has a nice rapport with Chris Genebach (Man) as her spouse, who is equally capable of realistically portraying a husband/father who may not be perfect, but certainly loves his children.   Sam O’Brien (Boy) and Maya Brettell (Girl) take on the characters that are the youngest in the play.  Most comfortable when playing rivaling siblings, they both have a natural stage presence and display great intuitive acting chops for such young actors.  They are extra cloying at times when they need to be, and can display subtlety when needed.  Annie Houston (Older Women) is most successful when she plays Nicole at the end of the play and deals with her husband’s (Sam) declining health.   No words are necessary as she displays her enduring love for him.   She also allows other moments of the story to play out with a quiet reverence, such as when she gives a granddaughter a compass and when she meets her great-grandson.  Finally, Matt Dougherty (Older Man) shows great versatility as he takes on the roles of caustic (and sometimes inappropriate) grandfather and loving husband/father to his aging wife/adult children although he is most successful when portraying the former.  Either way, he has a credible rapport with the other members of the cast.

Overall, the strong cast finds the humor and the drama in the story and brings clarity to what could be an even more muddled play in less-capable hands.   When this high level of acting is coupled with strong production values- including Timothy R. Mackabee’s realistic set design and Elisheba Ittoop’s situation-appropriate, understated sound design and original music- the end result is a worthy theatrical experience.  LeFranc offers a compelling glimpse of the American family and shows good promise as a writer; the cast charged with bringing his words to life is first-rate.

Running Time: 80 minutes without an intermission.