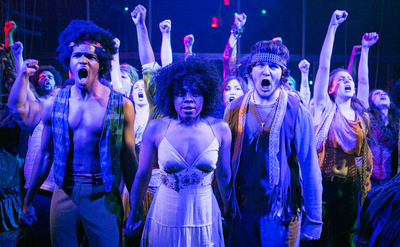 When Hair first came to Washington in 1971, a dead downtown burst into life.  The anti-war counterculture was at its height, hungering for recognition by mainstream America, hankering to become mainstream America.

Hair’s integrated cast, its rock/blues/African rhythms, its drug-laced, sex-laced, profanity-laced lyrics, and of course its flash of flesh and dissonant imagery were what so many DC theatre-goers had waited for (for more than three years).

Today, DC theatre-goers are not waiting for the revolution anymore, but if they step into the historic Church Street Theatre they will find out what all the fuss was about.  For Keegan’s production of the famed show has found a perfect home and a cast rippling with energy and voice. 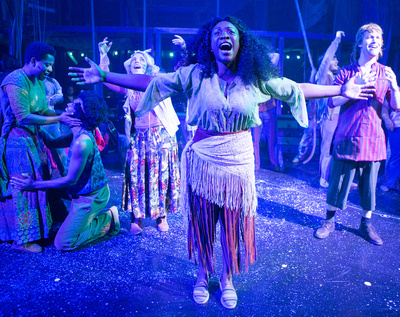 Amidst the theatre’s red brick and intimate seating, the raucous WAPPO tribe exudes such a fabulous feast of affection that by the last “Let the Sun Shine In” the audience swoons with delight.

As the nine-member orchestra rips through Galt MacDermot’s score and cast member after cast member steps into the light to belt out more of James Rado and Gerome Ragni book and lyrics, for those old enough to remember the Vietnam War the turmoil of those days comes rushing back.

For those not old enough, well the musical proves its aesthetic power once again.  It might be a museum piece because of its thematic protest of the draft, i.e., the forced conscription of young men into wars they do not want to fight, but its yearning after a world capable of love and friendship endures.

…the famed show has found a perfect home

Hair is more about a generation than a story, though the outlines of story are indeed present, albeit in lyrical or poetic form.

An anti-war group of “hippies” has taken over a building in New York City.  One member, a smart young “English” lad named Claude (played authentically by Paul Scanlan) has been drafted.  He must decided if he will refuse to serve and burn his draft card, as other members of the tribe have done, or if he will keep his options for a “moneyed” American future open.

The leader of the tribe, Berger, played with manic, yet charming energy by Josh Sticklin, does his best to convince the distraught Claude to stick with the tribe, as does Sheila, the young woman in this strange love-triangle, played tenderly by Carolina Wolfson.

But Hair is not about the story: at least not now.  It is all about the tribe and the ethos they represent through song.

And this ensemble of young actors pulls out all the stops.  It is way too large to mention every one of the players, but suffice it to say that they create together a playground of disenchanted, love-blind hippies.  And boy can they sing.

The audience is thrown into the “be-in” from the get-go as Ronny (Ines Nassare) launches into an uplifting “Aquarius.”  Her beautiful, powerful voice gets our attention, and then when Berger introduces himself by throwing himself, literally, into the audience’s lap, the sensual nature of the Hair experience has begun.

Many standout moments followed; I will only mention a few. 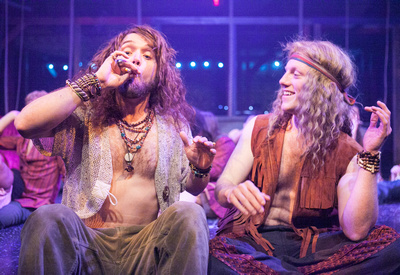 Although the show exists primarily within a more flamboyant space, a space of communal love, its undercurrent of repressed intimacy occasionally pops out, as in the song “Easy to Be Hard,” sung by Sheila (Carolina Wolfson) to Berger.  Berger’s crazed reaction to her personal expression of love echoes a sharp irony to a world supposedly bathed in such sentiments.

The dueling songs “Black Boys” “White Boys” were a particular joy, not only because the tribe’s white females (Lyndsay Rini, Emily Levey, Katie Furtado) and the black females (Eben K Logan, Ines Nassare, Jade Jones, Kedren Spencer) did such a fabulous, sexy job with their respective numbers, but also because it brought home just how culturally radical Hair’s racial-sexual content was when it first opened in 1968.  That same year TV’s first interracial lip-to-lip kiss on Star Trek (albeit forced by aliens) had caused a major controversy.  Well, with Hair, we are not just singing about kisses as Woof’s comic number, performed funnily by Christian Montgomery, “Sodomy” clearly indicates.

Of course, I have to mention the show’s finale, “Let the Sunshine In” or rather “The Flesh Failure” not only because of the song’s popularity but because the ensemble really does the song proud, capturing the emotional catharsis of the play and sending everyone into a rousing ovation.

The nine-member orchestra, led by pianist conductor Jake Null, does a splendid job handling the music, keeping it fresh and lively at all times.

Scenic designer Matthew Keenan has once again creates a set that looks like it belongs in the rough-hewed space and that also provides the huge cast with enough room to appear comfortable (most of the time).

Costume designer Chelsey Schuller has done the “hippies” proud with her elaborate tapestry of patterns and layers.

To be sure, Hair and its representation of 1960’s countercultural music and politics is at best the watered down version of what was really happening in the streets, the communes, and the underground spaces.  It’s not the Rolling Stone’s Mick Jagger (hilariously, and embarrassingly, idolized by Woof) singing “I Ain’t Got No (Satisfaction);” but the show nevertheless challenges core principles and asks deep questions about life and its values.

Nevertheless, the young still possess a yearning for a better world, a world less dictated by greed and power.  It is that world that ripples beneath the surface of Hair, embodied by the music and exuded by the vibrant life on Keegan’s Stage.