Theatre Review: ‘Boeing, Boeing’ by Montgomery Playhouse at Theater at the Arts Barn 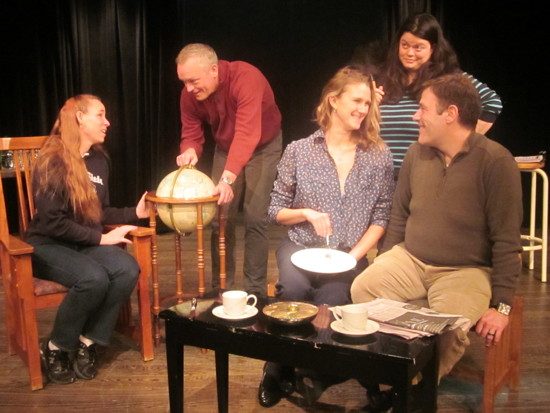 The cast of ‘Boeing, Boeing.’ Photo provided by Montgomery Playhouse.

The old saying “timing is everything” is definitely the case in Marc Camolettis’ Boeing, Boeing a comical show based on the story of an unsettled bachelor living in Paris. The show is part of Arts on the Green at The Theater at the Arts Barn, a series in Gaithersburg, a well-known establishment that guarantees to deliver first class theatrical performances in a beautiful quaint setting.

The story, set in the late 1950s, begins as Bernard (Jason Damaso) gets a visit from an old friend Robert (J. McAndrew Breen). As the two catch up and become reacquainted, it is clear to Robert that his friend Bernard is playing with fire as he systematically juggles 3 different relationships with 3 very beautiful women with only 2 things in common. They are all flight attendants and they all think they are the only one in the charming Bernard’s life. As one may expect a series of events occur taking Bernard on a very “turbulent” ride.

Its cast and production crew are seasoned, well-rounded, multi-talented individuals…

While every aspect of the show was superbly done, the set was most impressive. Set designer/producer David Jones out did himself. The layout for Bernard’s home is amazing, boasting incredible use of stage space and attention to detail. Design however is nothing without talented set constructors to execute the project. Bruce Angstadt, Steve Deming and Mark Shullenbarger, along with Jones himself crafted a masterpiece. The result is a flawless, well-constructed detailed home that provides depth and substance to the stage.

In addition to constructing the set, Steve Deming and Mark Shullenbarger create the perfect lighting design to enhance every scene. Another very nice “touch” to the performance is the music being played in the background as audience members arrive.  Songs from musical groups such as the Beatles and other iconic groups from the era are featured. It adds a special feel to the overall experience and helps set the mood for the show.

Director Lisa Lorraine Holland and assistant director Hannah Anderson team together to pick an outstanding cast. Featured leading ladies include Janet (Corrie Bolcik), Jacqueline (Christina Fox), and Judith (Renatta Morelli).   Janet is the fun-loving American flight attendant, Jacqueline the serious Parisian romantic, and Judith the ever so passionate German fire cracker. Fox and Morelli have perfected their perspective dialects with the help of Dialect coach David Dossey. This is such an important factor for the show as it is an essential aspect to character development.

True to form, Anne Vandercook captivates and wins the audiences love with her interpretation of Bertha, Bernard’s housekeeper and maid. Vandercook has an undeniable ability to connect with live audiences and is instrumental at creating chemistry between herself and fellow cast members. The props and costumes designed by Maggie Skekel and Kay Coupe are utilized well and have a classic vintage flare, an essential element adding flavor to the life-like set.

In a nutshell, the performance of Boeing, Boeing at the Gaithersburg Arts Barn is an example of fine community theater. Its cast and production crew are seasoned, well-rounded, multi-talented individuals who are dedicated to sharing their passion with the public and supporting the arts in Maryland.

Advisory: This play contains adult language with adult themes and is intended for mature audiences.