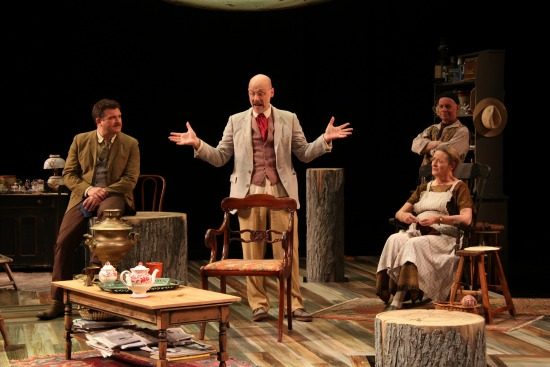 Uncle Vanya is like the relative you once used to see every decade or so at family reunions. Suddenly, he’s been coming to every Thanksgiving. And now you might think he’s moved in altogether.

Chekhov’s work is all over local stages this season, mostly in broad variations, from Aaron Posner’s Life Sucks at Theatre J, to Christopher Durang’s Vanya and Sonia and Masha and Spike currently at Arena and even a woozy, interactive Drunkle Vanya at the Pinch. Chesapeake Shakespeare Company did a more traditional Uncle Vanya in Baltimore earlier this spring.

And the straightest version we’ll get of Uncle Vanya near D.C. is the one that just opened at the Round House Theatre in Bethesda.

And yet, this adaptation by Annie Baker, working with a literal translation by Margarita Shalina and the original Russian text, has its own particular quirks embedded in it, with characters replying “yep” and talking about the abundance of “creeps” around us. At the same time, it restores some Russian references that had been removed from previous translations and somehow they sound funnier.

The casting is kind of a parade of artistic directors past and present.

Why the clamor to this particular Chekhov? Maybe its complaints about ennui, boredom and disillusion speaks to our time; its array of unrequited yearning, a metaphor for unfulfilled hopes. Or maybe everybody saw that production with Cate Blanchett at the Kennedy Center in 2011 was inspired to try their own.

At any rate, the Round House production is packed with a solid cast and a delightful set, whose scattered leaves and lack of walls suggest a wide open emotional nostalgia.

Mitchell Hebert plays this particular Vanya, moping around for much of the long play except when he explodes in the second act and crystallizes the action. He’s smitten by Yelena, the young second wife of the professor for whom he toils. Gabriela Fernandez-Coffey plays her with a knowing allure, enhanced by Ivana Stack’s elegant costuming.

The professor’s daughter Sophia (Kimberly Gilbert) thinks herself plain, but smitten with a doctor (Ryan Rilette) who has been coming around more often so he too can woo Yelena.

Jerry Whiddon plays the professor, who seems to be scurrying on or off stage most the time, to attend to his work, not leaving much of an impression.

The best parts of the production may be at the edges, with master clown Mark Jaster as an underling and the peerless Nancy Robinette as a nanny. Throw in a few cats and they’re a New Yorker George Booth cartoon come to life.

Jaster also gets to play a little scene-setting harmonica here and there, adding atmosphere to the long speeches, as does Eric Shimelonis with a squeeze box or at the piano.

Baker, the Pulitzer Prize winning playwright known for her realist work in her Vermont Plays, such as The Aliens, by inserting so many wordless pauses, apparently doesn’t have the luxury to do that in her adaptation to this classic.

He certainly brings a different presence to the role, though he still remains part of one of the play’s most compelling scenes: a seductive pas de deux with Fernandez-Coffey, though she’s the one who wordlessly makes it work.

As in a lot of Chekhov, there’s a lot of action that takes place off stage, such as the shots fired in this one. As beautiful as the set is from Misha Kachman, it proved how nearly as important the soundscape of Shimelonis was, otherwise providing the buzzing bees and birds of the rural setting.

Running Time: Two and a half hours, with one 15 minute intermission.

Uncle Vanya runs through May 3, 2015 at the Round House Theatre, 4545 East-West Highway, Bethesda. Tickets are available online.