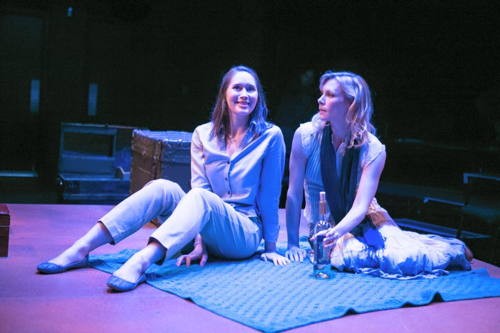 Blue Straggler, being performed at the “Source” theater as part of the annual festival is a beautiful story about fitting in, being an outcast, love, tragedy, innocence, and astronomy.  The show is part of the Science and Soulmates series and skillfully marries concepts of astrophysics with those of human psychology.

The story begins with Lisa, an astrophysicist, and Clarissa, a chocolatier, leading separate lives thriving and shining as two separate stars in their perspective worlds.  Lisa is an extremely intelligent, disciplined student working on her PhD and Clarissa, a free –spirited soul has mastered the art of making fine chocolate. Destiny and cosmic forces of the universe push the two together. Now instead of two distinct stars floating alone, they are bound together shining brighter than ever as a unified entity existing to live only for one another.

…a beautiful story about fitting in, being an outcast, love, tragedy, innocence, and astronomy.

The blissful love story turns into a nightmare as Clarissa is found dead in her apartment. Can Lisa continue to shine on her own as a single star or is she destined to be sucked into the black hole of an unknown world where she will shine no more just to reconnect with Clarissa?  Can Clarissa find a way to rest in peace or will she continue to remain in limbo between two opposing worlds? If outside influences prevail the two will remain apart forever.  If Lisa can make a scientific breakthrough with a little help of destiny sprinkled on top, the two will reunite.

This show is an example of art at its best.  The themes are current, daring to push the envelope of tradition by exploring sexuality, suicide, and family dynamics; questioning the very scientific laws that have prevailed for centuries while embracing the field of science and its infinite possibilities.  Playwright Rebecca Bossen captures the intangible and molds it into a meaningful story that delivers well on stage with the help of director Patrick Pearson.

Leading ladies Lisa, played by Jenny Donovan and Clarissa played by Heidi Fortune, are well-focused actresses equally sharing the stage creating a harmonious balance allowing each to shine when appropriate.  Sarah Holt starring as May, Lisa’s domineering mother, displays every quality of a well-seasoned actress.  She delivers her lines in an unforced believable manner possessing an amazing stage presence overflowing with energy and charisma.  Her southern accent is as refined as a well-mannered southern belle. Supporting actor Luke Ciesiewicz, is versatile playing both the role of the unforgiving Ragged who has the non-stop obligation to lead mortals from earth to their final resting place in the unknown and a concerned psycho-therapist guiding Lisa on a long winding trail back to a place of peace, sanity, and purpose.

Advisory: Blue Straggler is for mature audience members with a flair for the unconventional.

Running Time: The show lasts about an hour and a half and has one 10 minute intermission.

Blue Straggler is playing on June 25 and June 28, 2015. For more information on dates and ticket prices for the Source Festival click here.