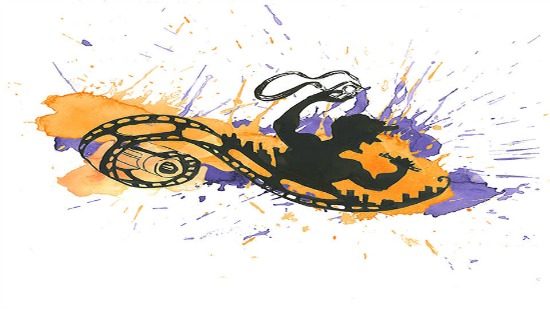 35mm: A Musical Exhibition is a concept musical written around a series of photographs by Matthew Murphy, which are projected in this production onto the back wall as the songs are sung, with suggestive, rather than elaborate staging. The songs by Ryan Scott Oliver are clever, catchy, and, at their best, very moving. They are also as musically interesting as they are dramatically inventive. Murphy’s photos are not intrinsically narrative driven or prescriptive, but instead open Oliver’s evidently vivid imagination in interesting ways, almost always conjuring a beautiful elaboration of, or counterpoint to the ‘frozen’ images.

The songs by Ryan Scott Oliver are clever, catchy, and, at their best, very moving.

In a refrain repeated through the show the actors declaim the word “focus”. The photographic metaphor is clearer than its intended unifying dramatic meaning, but the show and this production are certainly at their strongest when they find this focus. The idea of songs connecting to photographs is a simple, but strikingly rich idea. It also presents unique difficulties. Unlike a show built around a broader narrative, or a recurrent idea, we are perpetually hurled into new scenes, new characters and new themes throughout. This can be very exciting, but it also puts high demands on the clarity of story-telling both in the songs and their delivery. In an instant, after perhaps a glance at an evocative image and an opening lyric, we need to know where we are and why we care.

This happened extremely well in songs like “The Seraph” and “Make Me Happy,” whose intermingling added another level of accomplishment to the material and performance.  By contrast, the opening of the show was slightly confused, and it took a few songs before settling into itself. Even the connection between image and song took some time to feel present, making it difficult to discern immediately what was going on.

The show begins quite suddenly, and the band seemed taken by surprise at the start, needing a few beats to synchronise, as they did in a few other moments during some of the more interesting rhythmic turns of Oliver’s score. The vocal amplification caused problems, immediately producing feedback, and remaining poorly balanced or difficult to hear throughout. This vocal imbalance was particularly difficult during the ensemble songs, so while songs like “The Ballad of Sara Berry” were clearly audible, a credit to the articulation of the entire cast, many of the ensemble numbers were difficult to follow. There were some intonation problems in the singing and orchestra, perhaps stemming from these technical problems. The show contains really interesting vocal arrangements, executed extremely well by the cast in “Mama, Let Me In,” which could be heightened with more attention to the blend between voices.

There are some wonderfully powerful vocal performances and dramatic moments from the cast of Pat Burns, Tim Carroll, Karen Kelleher, Evie Korovesis and Christian Thorsen, who have taken on a work which is technically, dramatically and emotionally demanding, but also extremely interesting.

‘Focus’ almost works as a unifying image because it is a broad notion but for 35mm to reach its full potential, its focus needs to be fixed from the very first moments of the show, and particularly if we are to accept ‘focus’ as a unifying theme as powerful as it is intended to be. We always need to hear the words, and follow the dramatic intention, from the very first moment of the show, and in every song.

There are some great moments in this production, and I left wanting to hear more, and see the show again, perhaps in its own space, where technical difficulties could be sorted so that the strong material and performances could shine through.