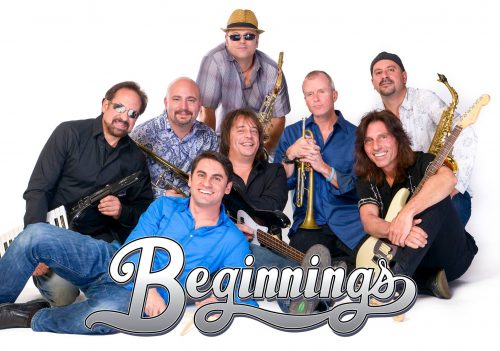 It’s classic rock with a brass section!Tight harmonies, breathtaking guitar solos all topped off with a horn section that would be the envy of many large orchestras.

If you have ever wondered what happens when eight talented musicians come together to play music they love, welcome to “Beginnings.” The band based in New York has mastered the sound and feel of the band Chicago. Their love and energy for performing Chicago’s songs are abundant on stage. The similarity was uncanny.

Like most people, I am familiar with the big hits of the band Chicago. However, I downloaded an album of the band before heading to the show. How can I compare a tribute band without studying the original sound, right?

Mason Swearingen leads the band on vocals and bass guitar. I am nicknaming him the McDreamy of musicians; I couldn’t take my eyes off him. His voice is so smooth.

Swearingen’s range is very impressive, and unlike many of the bands, we see today this guy is a born performer. He took the lead in most of the songs throughout the show, but also gave the audience a tour of history through the music of Chicago that spans over many decades. As someone who isn’t a die-hard fan, I got to learn more about the band. It was fascinating to know more about the transition the band made during the 80s when they started using different songwriters.

I wasn’t surprised to hear that lead guitarist Johhny Roggio had recently appeared in the Broadway smash “Rock of Ages.” Roggio can make a guitar sing. Throughout the show his guitar solos were impeccably delivered, you could hear the clarity of every note and riff. He also provided backing vocals and took to the mic for a solo during the band’s second set. Roggio was a joy to watch, with his energy, skill and his interaction with the audience.

The talent in this band is endless. Jeremy Fischer on drums stands up to take several moments in the solo spotlight taking on some of Chicago’s biggest hits. He has a good voice that cuts through with his higher range. He sings backing vocals throughout the show while keeping a solid base for the band. Kudos to him for mastering two very different skills and delivering with disappointment.

There isn’t a weak vocalist in this band, just when you think you have heard them all, Scott Chasolen steps up on the keyboards. A velvet tone and excellent intonation to his voice through some of the more challenging Chicago songs. His personality beams through when he is playing, he also backs up the other vocalists throughout the 2-hour show that for me could have lasted much longer.

The horn section adds an exceptional sound that no other band seemed to capture back in the 60s, or to this day. The horns are made up of Rob Cutts on saxophone, Michael Boscarino on trombone, Adam Seely on soprano/alto saxophones and Jason Chapman on Trumpet. Boscarino’s trumpet solo during the band’s namesake song “Beginnings” got the audience on their feet.
There were lots of brass solo moments that were a highlight for me – just incredible. These guys are tight musically and lots of fun to watch as they interact with each other on stage.

The band uses iPads to communicate with an audio monitoring system. The Harford Community College Technical Crew were in charge of the lighting and sound. The lighting on the stage in places was unbalanced, which made it hard to see the performers when they walked too far stage left.

Catering to so many vocals and instruments can’t be easy. The sound, in general, was good; there were several moments when microphones were not hot for a few seconds, but that were quickly rectified.

While the college was about a 40-minute drive away from Baltimore, it’s a great venue. After leaving I-95, it’s a great ride through the countryside, and you can park just steps away from the venue.

“Beginnings” was a one night only performance in Bel Air, you can check out the upcoming shows at Harford Community College here.