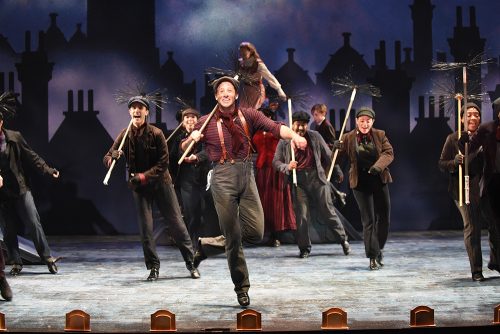 Magnificent! Great singing and dancing from a meticulously choreographed cast who know how to step in time!

A childhood favorite and staple of growing up in Britain I signed up to review “Mary Poppins” faster than you can say Supercalifragalisticexpialidocious!

I think I may have been more nervous than the cast as I headed out to see “Mary Poppins” at the Olney Theatre Center on Saturday, November 4th. I grew up watching the movie weekly; I know the story inside out, as a child, I hoped one day Mary Poppins would drop by my house for a visit.

This show knocked my socks off!

Great singing and dancing from a meticulously choreographed cast who know how to step in time!

The set is very elegant, yet simple and transitions seamlessly. However, don’t be fooled this is a well-engineered and timed masterpiece. How did Mary Poppins retrieve a coat hanger and large plant from her bag? How did she magically take flight along with kites, and who is controlling the birds and pigeons?

This version of “Mary Poppins” is based on the stories of P.L.Travers and The Walt Disney film.

The story of the “tricky” nanny hired by a wealthy British family to control their apparently unruly children. The uptight Banks family fear the loss of yet another nanny, but Poppins has more than a few tricks up her sleeve.

As Mary Poppins, Patricia Hurley played the world’s most famous nanny with confidence, charisma, and grace. From her British accent to her singing voice her performance is exceptional.

From the moment Rhett Guter hits the stage as Bert, the audience is in love. This cheeky chap is the perfect modern-day Bert, no easy role to jump into following in the well-timed steps of Dick Van Dyke famous for his role as Bert in the Walt Disney movie.

Guter is phenomenal mastering the cockney accent and holding his character throughout the show. I wasn’t surprised to read he appeared in the stage version of Billy Elliott. The superbly choreographed dance sequence during the song ‘step in time’ brought the house down. Guter very talented performer– a joy to watch. 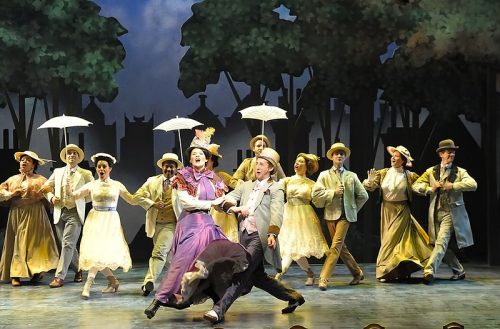 Eileen Ward plays George’s wife Winfred; the reminiscing failed actress. There is no failure in her performance in Mary Poppins; her delivery is impeccable at all times.

Katharine Ford plays Jane Banks. This young lady is surely heading for a very successful career in musical theater. She controlled her voice beautifully for such a young performer and held her British accent well throughout the show. Ford is a sixth-grader at Mount View Middle School in Marriottsville.

The only way to describe 9-year-old Tyler Quentin Smallwood as Michael Banks is adorable! This young man was born to perform! He holds his harmonies and dances well. For a young performer adds humor through intonation in his voice to his many quippy lines.

Dorea Schmidt is brilliant as Mrs.Brills. Schmidt is hilarious and nails her northern British accent – perfectly. Her character has some great one-liners, and she doesn’t disappoint on delivery. Schmidt also plays the bird woman; her voice is amazing as she sings “Feed the Birds,” her voice complementing that of Hurley.

Valerie Leonard gives an evil swagger to Miss Andrew, the childhood nanny of George Bank and the polar opposite of Mary Poppins. Leonard exudes character and experience the second she hits the stage.

There were several moments throughout the show when mics were not live, opening night teething problems. However, from the lighting to the costume design, and the incredible choreography by Tara Jeanne Vallee this show is a must see.

There is only one word that sums up this performance, Supercali…. You get the idea.

Running Time: 2 hours and 30 minutes, including a 15-minute intermission.

“Mary Poppins” at the Olney Theatre Center runs through January  1, 2017. For more information and to buy tickets click here.