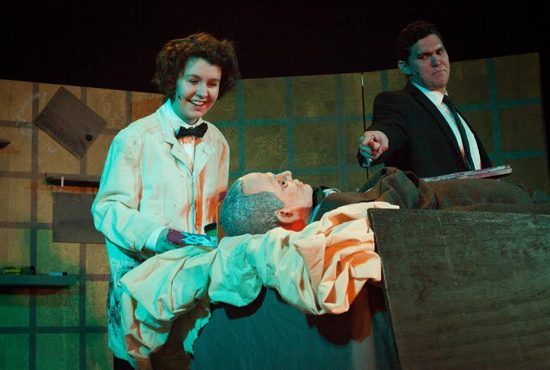 Baltimore Rock Opera Society (BROS) bestows Baltimoreans with another one of its productions – this one… a B-Horror Rock Opera, “Incredibly Dead!” Directed by Michael Ziccardi and Sarah Gretchen Doccolo and written by a team of Kathy Carson, Chris Lamartina, Matt Pie with Head Writer, Michael Ziccardi, “Incredibly Dead!” provides all the essential thrills, chills and laugher to make for a fantastic night of theatre.

The basic premise behind “Incredibly Dead!” is that a high-powered general is looking for barrels filled with mysterious goo that is found by two brothers, Reggie (Eric Poch) and Silas (June Keating) Cryptz, who own a soon to be bankrupt funeral home. When a powerful businessman, Mr. Coombs, dies and his body is entrusted to the Cryptz, the brothers decided to use the goo to embalm Victor Coombs with hopes that this goo will be their ticket to fame and fortune. In true B-Horror fashion, things don’t go as planned at the funeral and the Coombs family that come to pay their respects aren’t anywhere near “The Brady Bunch.” And joining the fun, there are puppets that rise from the dead, twins with humps, a boy with a grin three sizes too big and a mother of all mother’s.

…“Incredibly Dead!” provides all the essential thrills, chills and laugher to make for a fantastic night of theatre.

Eric Poch is Reggie, the older of the two Cryptz brothers and easily commands the stage with his facial expressions and character exaggerations. Poch did a great job of engaging the audience and his voice was strong and enjoyable in the song, “Measure of a Man.”

June Keating as Silas Cryptz is adorable, funny, sweet and perfect as the slightly innocent and naïve little brother. Keating nails her one-liners and had me laughing each and every time.

General Maximilian Morder, played by Danielle Robinette, stole the show during her song, “Homily.” This song and her excellent performance, I believe, is everything that BROS stands for.

Another song highlight is “Good Taste,” featuring Zilch Powers, John Bennett and Bonnie Hollyer (as Victor Coombs, Baron Bryson Coombs and Constance Coombs, respectively) rock out and rap as the vastly alternated version of their original characters. So fun!

Molly Margulies as Victor’s daughter, Catherine Catty Coombs, is so overblown she is flawless.

The live band, Cemetariot, is terrific! Lots of energy and the Band Lead/Guitar, Paul Joyce, wrote all the most of the music himself with the help of Greg Bowen on a few songs. The other band members are Nick Jewett, Guitar; Rich Kolm, Bass; Amiel Nuchovich, Drums; Julius Verzosa, Keys; Gino Abellanosa, Viola; and Jacob Deaven, Sax, EWI.

The technical meaning of “B” entertainment fits into the category of low budget, formulaic, and often feature some of the cheesiest acting and dialogue you’ll ever see.  BROS give us all of that but do it with incredible talent and delight. This community loves it’s Rock Operas and it shows on the stage, with the production and design crew and their vast amount of volunteers. If you are looking for a guaranteed good time, don’t miss BROS “Incredibly Dead!”