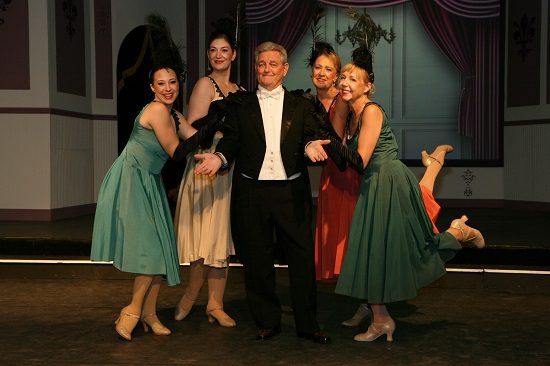 Hear ye, hear ye! Come one, come all and tip your glass in celebration of the Old Time Music Hall’s 55th Anniversary show.

55 years ago, the British Embassy Players, named as such because members were from the British Embassy, decided to create the Old Time Music Hall bringing British plays and culture to the area.  (This venue was a standard in Europe at the turn of the last Century and these music halls continued up till the 1960’s. )

A live orchestra lead by Arielle Bayer sets the tone as beer/wine, non-alcoholic beverages and light snacks are served by the cast wenches. Malcom Edwards does a bang-up job as the Master of Ceremonies playing to the crowd and deftly weaving jokes and humorous lines into his introductions.  There is dancing that will bring you back to the gay 90’s, toe tapping melodies and audience sing-along led by members of the cast.

The Director/Choreographer, Teri Klein Allred, and the creative team did a time-honored job researching and re-creating an old time British Music Hall set during the Victorian era, and they were spot on with the colorful, flowing costumes, well timed choreography, and memorable song choices. It was a rousing, fun time, and it certainly made me feel as if I had crossed the Atlantic (the pond), all while sitting in a Town Hall turned music hall in Maryland.

Albert Coia stole the show with his tongue in cheek song about his “Little Dicky”, which brought down the house with laughter. The barbershop quartet song took you back in time with unsurpassed harmony and the dancing throughout the show was exquisite as were the chorus of singers. Stevie Miller’s rendition of “My Love if like a Red, Red Rose” was breathtaking as was the ballet style dancing by Abigail Kruger. The second act gave a nod to the original cross dressers which was and is a staple in British theater, done tongue in cheek, pithy and fun. And the ladies did a witty song about careers which was masterfully choreographed.

This show can be enjoyed by all ages, as evidenced by the audience.  A song or two might touch on a memory from the past or be a reminder of simpler times. I know that all who enter the Music Hall may find themselves transported to a place and time from a bygone era.