Theatre Review: ‘Book of Days’ at The Colonial Players of Annapolis 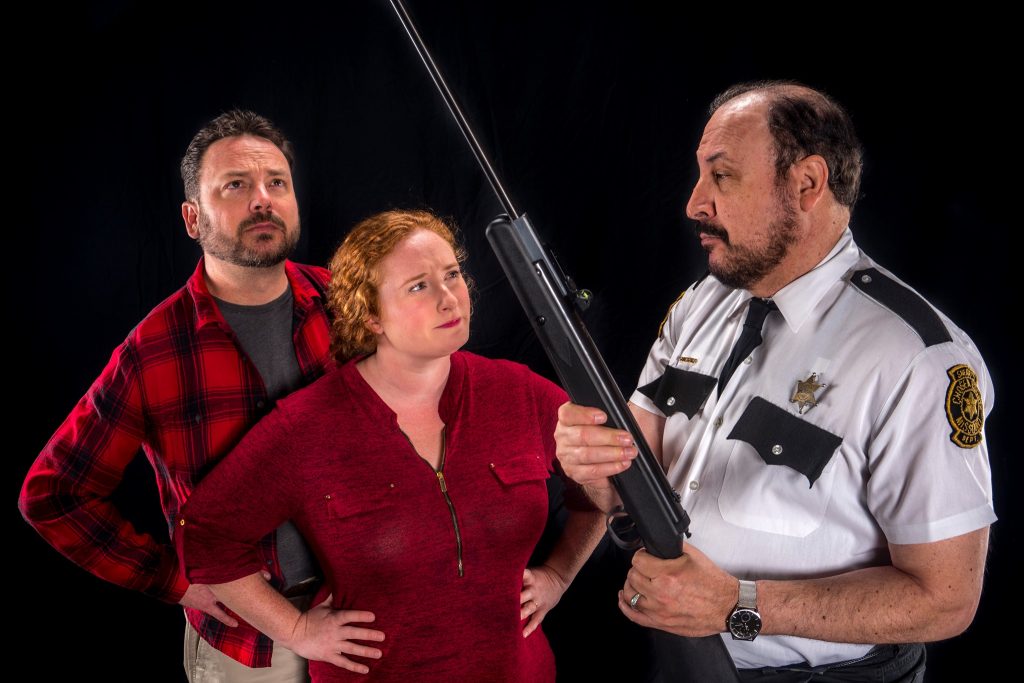 L to R: Jeff Mocho, Robin Schwartz and Bob Singer at The Colonial Players of Annapolis.

Something is amiss in the small town of Dublin, Missouri, a fictitious location in the “Book of Days” by Pulitzer Prize-winning playwright Lanford Wilson. The Colonial Players of Annapolis tackles this heavy play in two acts with gumption, and the production directed by Shirley Panek boasts an earnest ensemble that brings complex, flawed characters to life.

“…The Colonial Players’ ‘Book of Days’ is a visceral exploration of values, what we value, and a call to rise above reality”

The sparse theater-in-the-round style staging immerses the audience right smack dab in the middle of nowhere, and it is interesting to discover how the little spoken details add up to reveal a place teeming with darkness, desperation, and deceit. Flashbacks and clever devices, such as the use of a metronome, set the cadence and effectively address the not so straightforward, sometimes stifling notion of time.

In the beginning, we see the chorus of citizens chiming in facts about their humble community, establishing a frame of reference, and providing a vivid sense of place—a place with a population of 4,780, a cheese plant, five churches, and community theater, among other things. Cheese plant bookkeeper and aspiring actress Ruth Hoch, portrayed by the endearing Robin Schwartz, shows up, busy preparing for her role as Joan of Arc in the play St. Joan by George Bernard Shaw, all the while bantering with husband and cheese plant employee Len Hoch, convincingly played by Jeff Mocho, and talking on the phone to Len’s mother and professor, Martha Hoch, effortlessly portrayed by the naturally funny Jean Berard. At this point, life seems swell for everyone.

“Book of Days” does not follow a traditional trajectory. Instead, it ebbs and flows at its own pace, weaving in important moments, in no particular order, such as Ruth’s audition for St. Joan weeks before. Here, she encounters big-shot director, Boyd Middleton, brashly portrayed by Jason Vaughan, and his assistant, Ginger Reed, played by the vibrant Ashley Spooner and this scene, brings a dose of humor, as does the next interaction with Ruth, Len, and his mother, Martha. Berard, as Martha is hilarious, as she has no filter and happily shares her thoughts on everything from young people and their piercings to her wilder days at Woodstock.

However, not all is pleasant in these parts, and events turn sour soon enough. Fast forward to dinner with director Boyd, Ginger, Ruth, and Len, and eyebrows raise as people’s questionable behavior and underlying motivations come to fruition. Vaughan as Boyd Middleton is effective as a fast-talking, smooth city slicker, while Timothy Sayles as cheese plant owner, Walt Bates, is more no non-sense as he shares his true feelings, or indifference rather, of his cheese business before he takes off for an unfortunate hunting trip.

As the days go by in the ‘Book of Days,’ other townsfolk show up, adding friction to the fragmented community. There’s Sharon Bates, Walt’s conservative, religious wife, played spot-on by Darice Clewell, and restless son James Bates, who is smartly played by Paul Valleau, and his suffering wife LouAnn Bates, played by Erica Miller, who does an excellent job gaining others sympathy for what she has to put up within her marriage. Rounding out the cast are David Cooper as the fervent Reverend Bobby Groves, and Matt Leyendecker as Earl Hill and Bob Singer as Sheriff Conroy Atkins, both of whom give solid performances in their roles.

A lot transpires over one fateful summer, including a mysterious murder and tornado, leaving twists, turns, and people talking for days on end. Ultimately, The Colonial Players’ “Book of Days” is a visceral exploration of values, what we value, and a call to rise above reality.