Tucked away in the middle of a residential a neighborhood in Rockville, MD The F. Scott Fitzgerald Theatre in the Rockville Civic Center finds itself home to The Victorian Lyric Opera Company’s production of The Mikado this June. Having “performed all but two of the Gilbert & Sullivan canon many times over”, I was looking forward to seeing this production of one of Gilbert & Sullivan’s most popular works. Unfortunately, it was a very mixed kimono. 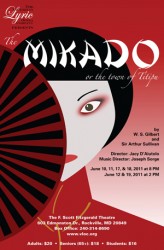 Set in an undefined time of “past” Japan, The Mikado follows the story of Nanki-Poo (John Williams) – the son of the Mikado (Emperor) of Japan (Tom Goode) – who has fled his father after being ordered to marry the much older and rather unfortunate looking Katisha (Jennifer Rutherford), disguising himself as a wandering minstrel – who plays the very romantic second trombone. Having come across the beautiful, but unfortunately engaged, Yum-Yum (Shaina Virginia Vatz) in his travels, he rushes back to the town of Titipu when he hears that Yum-Yum’s betrothed, Ko-Ko (Gary Sullivan), has been sentenced to death for flirting – a crime recently made punishable by decapitation by the Mikado. Arriving in Titipu, Nanki-Poo finds, to his dismay, that Ko-Ko has avoided his sentence by having himself appointed Lord High Executioner with the help of Pooh-Bah (Blair Eig) – the Lord High Everything Else, ranging from Chancellor of the Exchequer, to Town Solicitor, to the Personal Secretary of The Lord High Executioner. With an equal combination of the outrageous premise and outrageous cast the story unfolds with Ko-Ko attempting to keep his head (literally), Nanki-Poo attempting to be either with Yum-Yum or dead, and Katisha attempting to find her errant beau.

At the performance I am attending the orchestra is housed in a makeshift aboveground “pit” and the lyrics being sung on stage are broadcast above the stage in a manner more associated with operas in foreign languages. It is so important that the witty and punny lyrics in this work be understood, but quickly the orchestra, under the direction of Joseph Sorge, is playing too loudly and the actors aren’t articulating the words. Even songs well known to much of the public, such as “Three Little Maids from School are We” are difficult to make out, leading to relatively constant glances away from the action on stage to see what is being said.

With such an outrageous plot it is hardly expected for the acting on stage to be somber and realistic. It does, however, lend to the comedy when the audience is lead to believe that the characters are not aware of their shear absurdity. It is likely that this is what Gilbert and Sullivan intended for the cast, having blatant puns – such as Nanki-Poo stating that his suit pursuing Yum-Yum had been foiled by a tailor – escape the notice of the characters making them. The Victorian Lyric Opera Company unfortunately takes the opposite position. The characters on stage are overly aware of being comic, even resorting to turning to the audience after some puns as if necessary to edge them into understanding they’re making a joke. With the characters blatantly aware of their absurdity, if anything, it takes away from the inherent comedy in the script, leaving everyone on stage over-acting.There were two voices and performances that were very enjoyable. John Williams, who was perfectly cast as Nanki-Poo, and sang his premier aria “A Wand’ring Minstrel I” so beautifully. Gary Sullivan’s performance, as the bumbling villain Ko-Ko, was quite enjoyable. His personality came off as so likeable and earnest, and it as such a pleasure watching him perform.

Using a few brightly-colored red and yellow pagodas, a few screens and an equally bright blue “sky” as a backdrop, Jacy D’Aiutolo ‘s simple set worked very well in giving the impression that the actors were acting inside what might be seen as a set production of classic Asian paintings, which can be found at any art gallery.

There were some very entertaining and well-sung moments in The Victorian Lyric Opera Company’s production of The Mikado. I only wish that the pacing was faster and that the comedic timing was funnier.

The Mikado, produced by The Victorian Lyric Opera Company, plays through June 19th at The F. Scott Fitzgerald Theatre, 603 Edmonston Dr. in Rockville, MD. For tickets call (240) 314-8690, or purchase them online. Running time is about 150 minutes with a 15-minute intermission.