An older gentleman leans in next to me and inquires, “Tu Peruvian? Habla español?” I reply, “No, hablo muy poco espanol. Mi amigos are from places like the Canary Islands, El Salvador and Colombia, so I learn from them.” He nods approvingly, perhaps pleased with my Spanglish? Such is the diverse audience mingling in the inviting GALA Theatre. 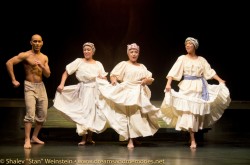 While we wait for show time, musical sounds, infused with heavy drums, an African flair and lyrics in Spanish fill the intimate theatre: the sounds of Peru. Such was the start of an impassioned show detailing a part of Afro-Peruvian history.

The play is divided into two acts and gives an account of the origins of Africans forced into slavery in Peru and the contemporary living of Afro-Peruvians in Peru and Washington, D.C. The show gives the audience rich music, mixed with a little poetry and a lot of history.

The show opens with slaves in chains trudging across wooden planks with dreadful looks on their faces. They are from Africa. They do not know this land. They wonder how long this imprisonment will last. The pain of slavery is eased by the music; the drums, the beats, the songs, the praise, the dances give a sense of hope in the midst of despair.

Act One is the weaker of the two parts because it was very slow and it was difficult to watch so much disturbing whip snapping, wailing and pain. Despite this emotional and heart-wrenching journey, the actors were a joy to watch and hear when they played instruments made of a pumpkin or made a beat with two stones tapping together, and sang their yearnings to be free, specifically the musical numbers “Ven a mi Encuentro” and “Raices de Festejos.” Lead actress Vicky Leyva has a beautiful voice and has obviously passed this glorious trait along to her two daughters, Vanessa Diaz and Susan Duston, who also star in the play. While encompassed in song, these three smile great big grins and move across the stage with fire under their bare feet.

Act Two is where the energy changes, picks up and soars. It’s a romp of song, saturated with precise drum beats and bright, vibrant colors worn by the actors in a contemporary setting. The tunes, “Fiesta Negra,” “No Valentin,” and “Se me van los pies” clearly enraptures the audience. They sway with the beats and snap their fingers as the actors move with grace. But, Act Two also feels a bit preachy. It teeters right on the edge of a lengthy sermon with issues such as domestic violence and women’s rights presented in the dialogue, but falls back in line right when it seems to be too much for the audience to handle. Leyva weaves her own experiences as an Afro-Peruvian into the show. Her two daughters also speak on the effects of living in Peru as Black women, and how, though they have relocated to the U.S., Peru will still be in their hearts.

The set design and lighting are a dream. Timbered planks stretch from one part of the stage to the other end and reaches out in a larger platform at center stage. Tall, transparent shades, sometimes a burning, crimson color and other times rays of straw, illuminate characters as they stand behind them and recite poetic dialogue or sing a song to a Peru only they can see.

Canto al Peru Negro is worth seeing. Spanish and English speakers alike will enjoy hearing the sounds of Afro-Peru and will likely join in the celebration of such a vibrant country. I walked out of GALA pleased, as I learned a great deal about the Afro-Peruvian culture. Anyone who chooses to make their way down 14th Street, N.W. will feel the same.