There is no such thing as too many great super heroes and Landless Theatre Company’s Fringe presentation of Captain Freedom by G. Xavier Robillard is a hilarious illustration of just that. Chronicling the wild and zany life of hands on 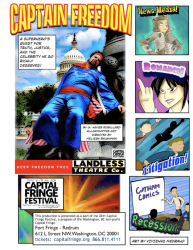 crime fighter Captain Freedom, the show expertly used projected media and a heroic ensemble cast to make the most of their space. With witty one liners, all the pop culture jabs you could want and a thoroughly enjoyable plot, this all American gem – directed by Melissa Baughman – is a ‘Must See!’

Catpain Freedom (Andrew Lloyd Baughman) provided non-stop, side splitting laughter with his perfect costume and puffed up ego. Agent (Matt Baughman) kicked butt as the super hero’s foil, as well as several hilarious secondary characters. Love interest Kaeko (Momo Nakamura) flaunted her evil attractiveness just as often as she flexed her funny bone and the Stenographer (Ally Jenkins) fulfilled every necessary supporting role with humor and flair. As an all around superb show with witty dialogue, topical humor and a cast with fabulous chemistry, it would be a shame to miss.