David Mamet’s infamously expletive-heavy script for Glengarry Glen Ross is full of both salesmen at their wits’ end and at their most confidently triumphant. The premise: a real estate office’s upper management has pitted its four salesmen against one another in a contest to see who can get the most sales by the end of the month because to the victor goes invaluable new sales leads and a shiny new Cadillac. 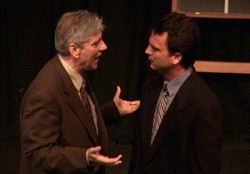 Problem is, one salesmen brimming with braggadocio is blowing all the others out of the water, while the other three (two of whom are past their prime and are often seen speaking nostalgically of bygone salad days when they were the top salesmen) are paranoid that they’re going to lose their jobs and their livelihoods if they don’t turn things around for themselves, ethics be damned.

Director Wayne Nicolosi should be proud of his troupe’s energized and skillful performance. Actors Joe Kelly and Brian Binney – respectively portraying salesmen at the top of their game and at their lowest and most conniving – provide more than enough charisma and machismo between the two of them to make this play more than worth choosing to see amid a busy, busy Capital Fringe Festival theatre season.