Fringe Review: for colored girls who have considered suicide/when the rainbow is enuf

Confession: I have read Ntozake Shange’s choreopoem for colored girls who have considered suicide/when the rainbow is enuf approximately ten times. After seeing it on stage, I will read it again and again just to recapture what I witnessed on stage at Studio Theatre. 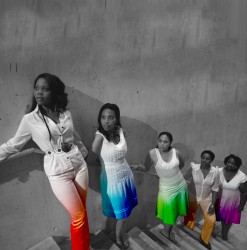 Shange’s choreopoem, initially performed on Broadway in 1976, tells what it is like to be colored and a woman in the twentieth century. It tackles issues of love, abortion, rape, betrayal, and friendships through seven women in different hues: red, orange, yellow, green, blue, purple and brown. These women seek a way to take back their lives after enduring what seems like endless pain and hardships.

I was enraptured by these performances! And so was the audience. When Lady in Blue (Michelle Rogers) declares to Lady in Yellow (Lauren Du Pree), “You gave it up in a buick?!?” Audience members chuckle, giggle, laugh and lean in for more. The most impressive performances come from Lady in Red (Fahnlohnee H. Tate) and Lady in Blue. Rogers adds a hint of fierceness to the role. She exudes confidence and sadness all at the same time. Tate struts across the stage in a red dress and carries her sorrow on the tip of her shoulders. There is heartbreak yet joy in this action. Some unevenness occurs throughout the play. It opens with Lady in Brown (Nicole Brewer) whose words are supposed to be powerful, but don’t appear to be so here. The energy picks up when all of the ladies start to sing, “Mama’s little baby likes shortnin’, shortnin’/Mama’s little baby likes shortnin’ bread.” The show also stalls as Lady in Purple (Deanna Dykes) shares “Sechita,” while Lady in Yellow dances.

The costumes are simplistic, but gracefully worn. When the play begins, the seven ladies are all wearing white. As they begin to speak, they pick up their respective scarves and jewelry, peppered with colors. As the play progresses, they are sometimes dressed full in color and other times sprinkled with it. The black stage and one single painting sitting on an easel near the center is the set. There are no intricate furnishings, no lavish designs and this is quite all right. All is needed are the actresses and their ability to convey the sincerity in the lines of Shange’s beautifully written work.

As the play concludes with Lady in Red’s personal story, I could hear sniffles of tears from the audience and saw them pouring down the faces of the cast. This is compelling, heart-felt acting here. Forget Tyler Perry’s cinematic version of this choreopoem and get down to the Studio Theatre to watch these seven women in action! Trust me it’s well worth it!

for colored girls who have considered suicide/when the rainbow is enuf information and tickets.