So, do we lose our hearts, bind our hearts or nurse our hearts in the perilous journey of life? Writer/actor Miriam Kulick introduces us to six characters interrelated to 90 year-old Sadie, a sometimes grumpy, sometimes philosophical Jewish woman with a thread of memories swollen in a red covered photo album. 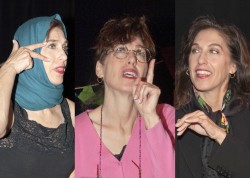 Six characters, all played by Kulick, reveal their heartfelt miseries, anxieties, hurts and bruises as they interact with Sadie, a woman with the tell-tale signs of living alone – talking to herself and to those who have passed on. A granddaughter, Greta, played by Kulick with the blush of a child on the cusp of womanhood, wishes to open her heart through the celebration of flight as she reminisces about the suicide of her mother, Sadie’s daughter. Henrietta, another of the women on the periphery of Sadie’s life, is still plagued by her father’s expectations and has a running dialogue with fencing lessons that led to her falling into a relationship with Sadie’s remaining daughter, Deborah. Deborah, a “shocked but glad to be lesbian,” gives her open heart story as she plans, against Sadie’s best wishes, to travel to Darfur in Africa and work with refugees.

In a leap of imagination and out of nowhere, we meet Anwar, a Middle Eastern woman, who shares her open and bleeding heart as the Universal mother that suffers. Throw in Sadie’s Dominican Republic building custodian who, encourages Sadie to live fully and pledges his ability to “fix” everything for his tenants, but finds he cannot fix the fact that he has been fired from his job.

One-woman shows are very difficult to pull off. In Open Hearts, we have Kulick and the set in shades of gray with swatches of red revealing the open heart suggested by the title. It’s even harder to use accents of cultures other than your own unless you are spotlessly adept at speaking them. The character of Sadie is dotted with lively quips sugared with Yiddish. While amusing, Sadie is made to say almost every cliché about women and aging. Fernando comes off sounding Jewish.

Kulick told me Open Hearts was developed first as a two-person show. Liking all of the characters, she decided to include them in the final play. Director Jeanette Buck felt that having lost her mother at age five deepened her understanding of the character Greta and her loss of her mother. “I still sing to my mother,” Buck shared, “while camping and staring up at the stars.” Buck added that a friendship with an 80 year-old neighbor helped her direct the banter of a Sadie, a woman past her prime.

Congratulations to Kulick for taking on the challenge of providing a show for female actors over 50 where so few exist.