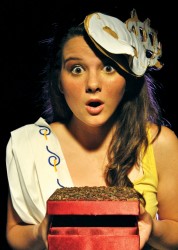 Pandora Releases a Box Full of Laughter at Studio Theatre. When a boy finds a girl awash by a shore, what follows will have you spewing with more laughter than your typical Nicholas Sparks-brewed romance could ever hope to deliver. Directed by Ann Fraistat and written by Shawn and Ann Fraistat, Pandora: A Tragicomic Greek Romp will take you on a 90-minute high-energy ride that picks up right away when Nikodemos (Jayme Bell) discovers Pandora (Madeline Whiting) sleeping by the sands of ancient Greece and brings her home. The men and women of Nikodemos’s town soon gravitate around her, as they ponder a string of questions: Who is this strange girl, who neither recalls nor wants to remember neither her past nor her origins? What’s in that strange box she’s been clutching all along? Why won’t she let anyone take a peek at its contents?

The characters of Pandora uncover the answers to their questions in vibrant performances from a cast that never disappoints. Bell’s versatility as an actor shines. He plays not only the eccentric idea-hatcher and prolific inventor Nikodemos but also the town-ravaging monster Demogorgon and the liver-pecked god Prometheus. As the story gains momentum, Nikodemos and Pandora become enmeshed in a love rectangle that involves his jealous fiancée, Eris (Katie Jeffries), and the loveable strongman, Megas (Matthew Sparacino). Jeffries performance brings Eris’s passive aggressive machinations to hilarious heights. The funniest moments of the night, however, come from Sparacino, whose spontaneous moves are sure to jolt you off the edge of your seat—that is, if they don’t leave you dribbling on the floor with laughter. Vying for Pandora’s attention is Nikodemos’s younger brother, Philo (Natalie Pyle), who teaches Pandora the art of the evil cackle. Pyle makes for a spectacular master of exaggeration. You’ll also meet the town Chieftess, Arche (Kathryn Pace), and her husband, Diophobos (Matthew Strote). Pace and Strote add zest to the humorous side of overreaching ambition and sacrilegious hypocrisy, respectively. Watch out for the Chorus Leader (Grant Cloyd), who delivers insights with a deadpan flare that would have the late Sophocles chuckling atop the hills of Elysium.

In the traditional myth, Pandora gains infamy as the girl who opens a box that unleashes all the evils of the world, including pain, disease, old age, pestilence, sorrow, death. While changes in this production’s lighting (designed by Jason Aufdem-Brinke) tip the mood between seriousness and playfulness, what you ultimately get is less tragedy and more comedy. The set and props (designed by Jessica Moretti and Erin Cumbo) hold a quirky charm that compliments the humor, which sweeps all aspects of this production. Even the run crew (Natalie Piegari, Michelle Fitzgerald, and Anna Lynch) comes to life at random moments to infuse troughs in the plot with gleeful excitement.

The Impressionable Players won Best Comedy and Best Overall Show in the Pick of Fringe Awards for their debut in Romeo & Juliet: Choose Your Own Ending at the 2010 Capital Fringe Festival. With Pandora, they’re well on their way toward receiving the same honors this year.