Fringe Review: Every Night I Die

Dash Productions present Every Night I Die, a drama about adultery, magic, spirituality, and hatred. I wanted to like this play, and had high hopes for it after reading the description, but instead I had to fight to keep my mind from wondering off amidst heavy-handed, overly-poetic declarations and dull musings. The actors talk very quickly, making it hard to catch details and stirring up confusion. I also found myself frustrated with how often the actors turn their backs to the audience during their dialogues.At times I wanted to stand up, wave my hands, and shout, “WE’RE OVER HERE!” 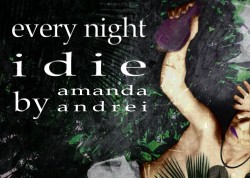 The only character that had a truly commanding and memorable presence was that of the wife, Rafaela, played by Jennifer Cendana Armas, who received the loudest applause at the end, which she deserved. Based on the ambitious content, I feel that his would fare better as a longer, two-act play, rather than trying to cramp so much into seventy-five minutes. There are some genuinely entertaining moments, but they are few and far-between, and with so many excellent shows rivaling for your attention, this drama unfortunately falls short.

Every Night I Die, information and tickets.