The Bird, a true story, is an intriguing, polished, one-man show featuring the talented character/voice actor John Feffer. This is Mr. Feffer’s third one-man show, and he is assuredly a magnetic performance artist whose presence lights up the stage. 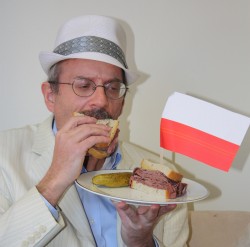 The Bird features the crisscrossing of three stories that center around — a relationship gone sour; Poland’s democratic “reinvention,” and the story of a man searching to discover his Polish roots. By themselves, these are all interesting stories that could be woven into one play, but therein lies my problem with The Bird. Instead of developing one story with an exciting plot structure that builds toward a gripping climax and transformative discovery of self, The Bird becomes more of a slide show of images and characters that are not connected to one coherent whole. I yearned for one absorbing, riveting story with a beginning, middle, and end.

Feffer, the narrator, is certainly charismatically glib, but not vulnerable. He is more of a tour guide. And the characters he plays outside of himself are engaging but not necessarily connected to a driving, coherent, thematic climax. For instance, Andrew, his Irish character, is certainly charming and funny. However, his monologue is more about cabbage than driving a story. Moreover, the monologue of Jerzy serves as the climax of the show but because it is not really connected to one driving theme, the monologue loses its ultimate impact. It stands alone – without a home to truly call its own.

Do I recommend this show? Sure thing. The writing, acting, and the direction of Doug Krehbel are first class. Me personally, I hungered for more of the story about the bird. What can I say? I have issues with my own female assassin.

The Bird information and tickets.