This shadow puppet fairy tale was truly beautiful. The delicate shadow puppets were a work of art. The puppeteers (Cecilia Cackley, Genna Davidson, Jennifer Jeremias and Rachel Manteuffel) and actress (Wendy Nogales) were successful in transporting us to the magical universe of The Malachite Palace to tell us the story of the encounter between an imprisoned princess and a little bird. 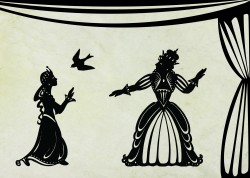 The story was acted out half by shadow puppets in a small puppet theatre – and half by real puppets handled by performers dressed in black on the scene. The shadow puppets were  more enjoyable, as the real puppets were neither as pretty nor as mobile as the shadow ones. The show was in both Spanish and English. The sentences in Spanish were easy to understand using the context, when they were not followed by their translation in English.

Overall, not being a big puppet-fan myself, I was charmed by The Malachite Palace, and I would totally recommend it to both adults and children.

The Malachite Palace information and tickets.