Fringe Review: The Man in the Arena

The Man in the Arena is a one-man show performed by Derek Evans, a man who makes his living visiting venues in the character of Theodore Roosevelt. This year he brings his act to the Fringe, sharing his passion for his personal hero – in front of a set appropriately adorned with two vast American flags and a sketch of Roosevelt’s laughing face. 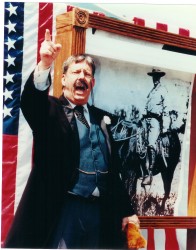 In the beginning, I was a bit wary. I assumed that the only people who would enjoy this show would be history buffs or Roosevelt admirers (of which I was neither), and was mentally preparing myself to sit through yet another history lesson. However, I found that I became and remained interested throughout the entire performance. Evans proves not only to be a wonderful storyteller, but a fantastic actor as well, taking us through Roosevelt’s childhood and political career with hearty enthusiasm. He has a commanding and powerful presence while also being friendly and engaging with the audience; holding our attention in one hand, and our respect in the other. He is also not without humor, and had the audience laughing often. The many things I learned about Roosevelt would have been enjoyable had it pertained to anyone, but the fact that these stories belonged to a heroic man in our American history makes it that much more remarkable. And yes, of course, the teddy bear IS present. Worth the ticket. Worth your time.

The Man in the Arena, information and tickets.