“Wow!” zipped through my mind during every minute of Pointless Theatre Company’s production of Hugo Ball: The Super Spectacular Dada Adventure. This re-telling of the late German Dadaist’s life (1886-1927) should be branded a re-yelling. And boy, is there a lot of yelling amidst the can-clamoring, drum-pounding cacophony in this hour-long extravaganza! 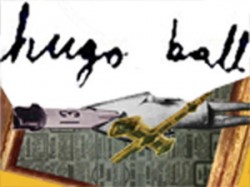 Written by David Olson and directed by Matt Reckeweg, it features a high-energy cast (Lee Gerstenhaber, Brendan Edward Kennedy, Zach Latta, Frank Lightsaber, Alex Leidy, Devin Mahoney, Stacy Musselman, Sadie Rothman, Scott Whalen, and Sarah Wilby) who will have you laughing, crying, and screaming as they run, jump, and cart-wheel across the stage. If you’re lucky enough, you might even get a chance to shield your face in a mixture of ignominy and amusement as one of them comes up to you, completely bare, and hollers, “Stop laughing!” in ironic castigation. Intentional contradictions abound: At one point, one of the cast members fervently mutters, “This is not a Dada show! This is not a Dada show!” before other cast members run around the seating areas, enveloping the entire audience in Dadaistic chaos during the semi-interactive affair.

The provocative production hurled Dada at you wherever you turned, assaulting all the senses. The music (designed by Aaron Bliden with Bob Manzo playing drums), not to mention the German opera-singing and balloon-popping, was deafeningly loud. My heart was pounding and my hair was standing up as I gripped my seat, fearing I’d get carried away and suddenly find myself in the tumultuous set (designed by Patti Kalil), which had what looked like an elephant-like godhead and a lot of other glittery objects and incomprehensible minutiae. As the cast members paraded around in Hopi- and Cubist-inspired masks, I almost feared they would grab my shoulders and suck me into the Bacchanalian vortex of irrational splendor they inhabited. Paper ripped, suspenders flapped, and a hundred things fell to the floor.

The creative puppetry, which included shadow puppets, disembodied models, and a pterodactyl, got lost in the swirl of controversial ideas that were thrown at the audience: sex, drugs, feminism, Freudianism, and all the other isms you could think about. It was impossible to find respite from the chaos. But oddly enough, no one left the room: The one-of-a-kind spectacle had drawn us to its enchanting grip.