Perhaps I might be toeing a critical boundary here, but I’ll say it anyway: I believe in this play. Local playwright Timothy J. Guillot’s play (directed by Joe Banno) is a rare gift. Five brave, young actors portray teenagers attempting to start a revolution by killing their parents. Under the tyranny of their vicious peer, Verlander (Leslie Vincent), they reenact scenes of emotional and physical brutality from their childhoods. Giovanne (Phil Dickerson), Mesh (Kyle Encinas), Maestro (Steve Isaac) and Sloan (Ezree Mualem) struggle to alternately bottle and free their anger. The vigor and genuine rawness that the entire cast brings to the script is breathtaking. This revolution launches due to an incident with a rubber ball, a flower and one child’s first encounter with rejection. What if the only thing worse than having a tumultuous childhood is having an achingly normal one? This play is destined to be a Fringe favorite and, hopefully, much more. Get your tickets. Now. 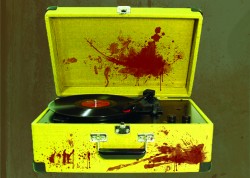